Shares in soap manufacturer PZ Cussons tumbled by 25% this morning – the worst day in the company’s history – after it issued a warning on full year profits.

The firm, whose products include Imperial Leather soap and Original Source shower gel, said that the downturn in profits was caused by weaker sales in its two key markets of the UK and Nigeria.

A trading update released by PZ Cussons this morning said:

It now anticipates profits before tax of between £80 million and £85 million. A Bloomberg survey of analysts suggests profits of around £93 million.

Shares touched a near nine-year low. 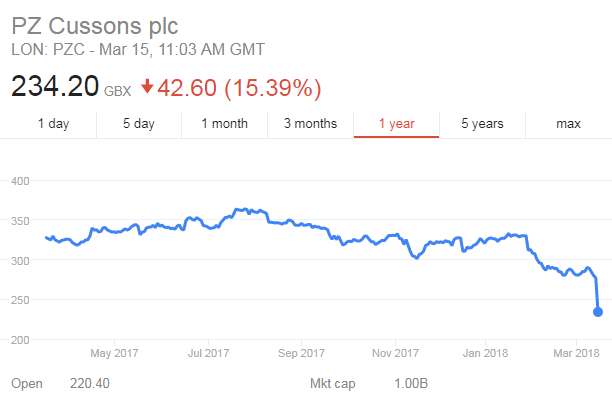 The FTSE 250 company attributed its problems in the UK to increased consumer caution due to general cost inflation and economic uncertainty.

The UK washing and bathing division has continued to experience lower levels of purchases reflecting consumer caution across all retail channels caused by economic uncertainty and inflation out-stripping wage growth.

Whilst new product launches have been well received, they have not had the desired uplift in sales to compensate for the wider volume and margin shortfall.

In Nigeria, the company’s largest market overall, problems were attributed to high inventory levels driving up competition particularly in sales of milk.

Milk is a significant division for PZ Cussons in Nigeria and it said that it plans to reevaluate its future in light of recent results.

Other steps the company plans to take include cutting its overhead base, evaluating product costs and prioritising fewer, bigger new products with less complexity.

We believe that the initiatives outlined above will strengthen the group’s brand portfolio to better withstand the subdued levels of consumer confidence and higher levels of competitive intensity which are being faced in most of the markets in which it operates.