The RBS share price has climbed at the London market open after news broke last night the bank — still majority owned by the British taxpayer — will pay $4.9 billion to the US Department of Justice (DoJ) to resolve a long-running probe.

The probe — into the bank’s packaging and sale of mortgage-backed securities before the 2008 financial crisis — has dragged on for years and investors are this morning relieved to be putting it behind them.

US Attorney’s Office for the District of Massachusetts said via Twitter that a preliminary deal was reached, though “further details remain to be negotiated”.

The U.S. Attorney’s Office can confirm that it has reached an agreement in principle w/ The Royal Bank of Scotland and certain of its affiliates ("RBS") to settle potential civil claims to RBS’s structuring and sale of residential mortgage-backed securities issued b/w 2005 & 2008

The so-called civil settlement — not technically a fine — is lower than many analysts had feared and the bank said $3.46 billion of it would be covered by provisions it has already taken.

The payment should draw a line under the bank’s financial crisis repayments, paving the way for the UK Treasury to begin selling more shares in RBS.

The UK Government still owns 71% of RBS after it paid $45.5 billion to bail out the bank in the aftermath of the 2008 financial crisis. 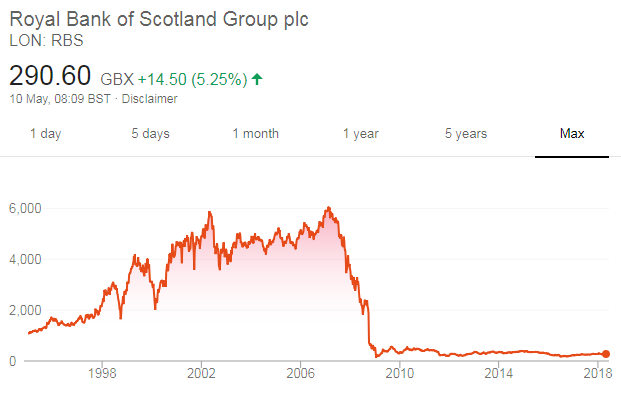 RBS chief executive Ross McEwan said this was a “milestone moment for the bank”:

Reaching this settlement in principle with the US Department of Justice will, when finalised, allow us to deal with this significant remaining legacy issue and is the price we have to pay for the global ambitions pursued by this bank before the crisis.

Removing the uncertainty over the scale of this settlement means that the investment case for this bank is much clearer.

UK Chancellor Philip Hammond last year promised to sell a hefty stake in RBS by March 2019, but plans have been on hold until the US probe was concluded.

It has been reported this morning by Sky News that the UK Government could sell a small part of its RBS stake before the summer, citing unnamed Treasury officials.

In March, RBS rival Barclays agreed to a $2 billion settlement with the DoJ.