UK consumers enjoyed shopping more in the last 12 months compared to the previous 12 months for every retail sector that they were asked about, according to new GlobalData research.

This is clearly a good thing for retail, with penetration also increasing in all but one sector; if retailers can ensure consumers enjoy shopping, there’s a greater chance they’ll spend more.

One way retailers have added value to the overall shopping experience is through experiential retail whereby retailers provide experiences and entertainment in store to attract footfall, increase dwell time and encourage spend.

Retailers from a multitude of sectors including John Lewis, Tesco, Ikea and Oasis have all invested in this, providing shoppers with beauty salons & treatments, pop-up shops and cafes to improve the in store experience.

Retailers are acknowledging this, and, in April 2017, Debenhams CEO Sergio Bucher announced a new strategy that puts shopping experiences at the heart of the department store’s business. 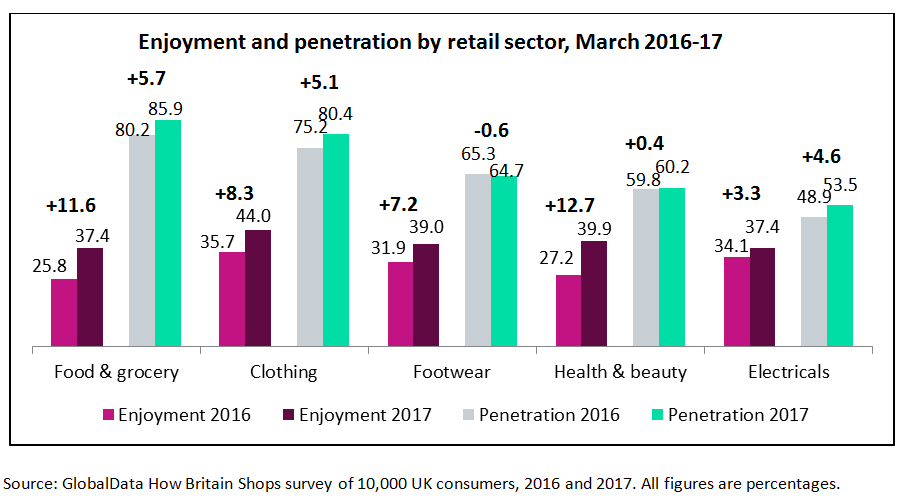 The data shows that the greatest increase in enjoyment year-on-year was health & beauty, owing to product innovation, the increase in the number of brands on offer at retailers and increased instore floorspace dedicated to the sector.

Department stores such as John Lewis and Harvey Nichols have been especially proactive – renovating stores and investing in events and services.

Penetration hasn’t significantly risen, which could indicate that health & beauty sales are not as responsive to investments in instore experience as other sectors.

This would be because many health & beauty players have offered forms of experiential retail for a long time, such as Lush, Boots and Debenhams, and customers are therefore less responsive to it.

The rise of beauty subscription services containing product samples such as BirchBox and GlossyBox has also allowed health & beauty shoppers to withhold spend until they have trialled products and decided which one they want to buy.

The period of economic uncertainty and lowered consumer confidence has not helped either.