Shares in engineering giant Rolls-Royce are up almost 12% today, thanks to the restructuring programme it announced this morning.

Rolls-Royce’s 2017 full year results revealed transformation programme achieved £200m ($227bn) in savings, which was at the top of the company’s estimates.

In January Rolls-Royce announced it had simplified its business primarily through moving from five operating areas to three core units.

This is expected to facilitate further restructuring of and streamlining the support and management sections of the company.

The three core areas are civil aerospace, defence and power systems. Naval marine and nuclear submarines have been consolidated within the defence unit and civil nuclear operations within the power systems area. 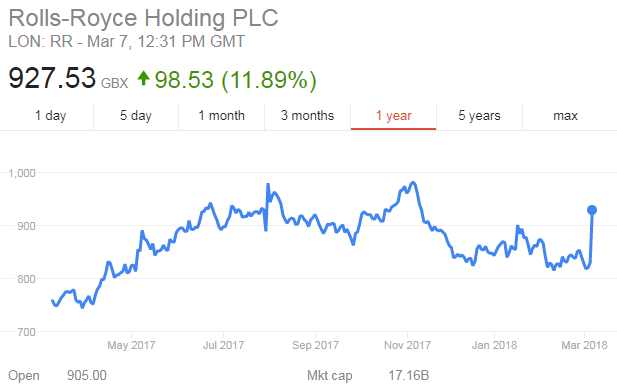 The company has appointed restructuring firm Alvarez and Marsal to advise on the programme.

“Rolls-Royce made good progress in 2017. Financial results were ahead of our expectations and we achieved a number of important operational and technological milestones, but were impacted by the increasing cost and challenge of managing significant in-service engine issues.”

“The business unit simplification and restructuring programme that we announced this January will drive further rationalisation and is a fundamental step in the journey started two years ago to bring Rolls-Royce closer to its full potential both operationally and financially.

“We are encouraged by the improving financial performance in 2017 with growing revenues contributing to improved profitability and cash generation.”

Although the 2017 end of year financial results were positive, the cost of fixing problems with the blades on its Trent 1000 and 900 engines dragged on its results.

First you have to realise that all mechanical things wear out over time, and some of the parts in our Trent engines are wearing out faster than we originally forecast.

We have a solution, we have a plan, it will take some years to fully implement the modifications in all the engines which are in service.

Despite this financial burden, Rolls-Royce is optimistic about further growth in 2018.

In its 2018 outlook, the company expects mid-single digit growth in revenue and between £300m and £500m growth in profit across its business.

Rolls-Royce also announced plans to further simply its staff structure in 2018 “with fewer layers and greater spans of controls across the group”.