Royal Bank of Scotland (RBS) — which was bailed out during the 2008 financial crisis and is still 71% owned by the British taxpayer — has made an annual profit for the first time in ten years.

Ross McEwan, RBS CEO said the result is a “clear indication of the progress we continue to make in putting the past behind us”, however the yearly profit is partly thanks to a delayed settlement with US authorities over historic mis-selling.

Shares in the bank fell at the London market open, however, down around 4%. 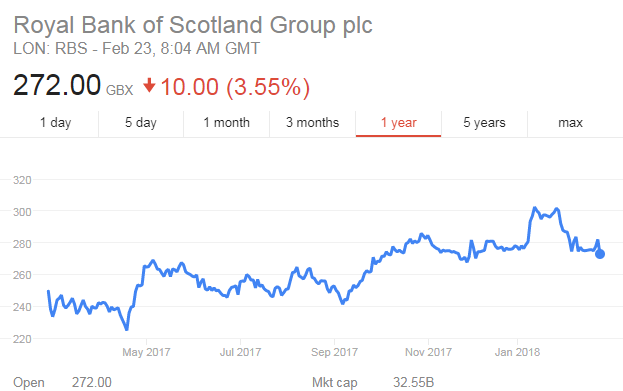 I’m pleased to announce an operating profit before tax of £2.2bn for 2017 and our first full year attributable profit in ten years, of £752m.

This is a symbolic moment for this bank and a clear indication of the progress we continue to make in putting the past behind us, while at the same time investing to build a bank which delivers for both customers and shareholders.

McEwan also revealed plans for the bank to invest 1.5bn in the next two years, including £800m on innovation and digital.

The US justice department is pursing RBS over its role in selling the mortgage-backed securities that fuelled the financial crisis which it’s thought could cost the bank between £5bn and £12bn.

RBS was the largest bank in the world ten years ago, with a balance sheet of £2.2 trillion, and it spectacularly fell from grace.

We’ve been restructuring the bank, but it’s taken time and a lot of cost to come out of countries and businesses we didn’t want to be in.

McEwan — who was appointed in 2013 and tasked with overhauling a bank loaded with toxic assets — received a pay cut of 6% in 2017, sending his pay down to to £3.5 million.