0 Reddit Email article LinkedIn 0 0
GlobalData Consumer
GlobalData is the market leader in providing actionable insight into the consumer goods industry. With market analysts in 18 countries around the world, along with a team of researchers and consultants, we can provide you with the reliable, in-depth industry information you need. For more in-depth analysis and insight view our reports at www.globaldata.com/store

Although some in the industry have forecast a decline in the popularity of gluten–free foods, the latest data doesn’t appear to confirm the hum.

A comparison between 2013 and 2016 shows consumers are increasingly attentive to gluten, according to GlobalData’s consumer survey.

Despite only one percent of the global population suffering from celiac disease; the gluten-free diet has been wholly embraced by the health community.

Those questioned were asked: How much gluten do you eat? 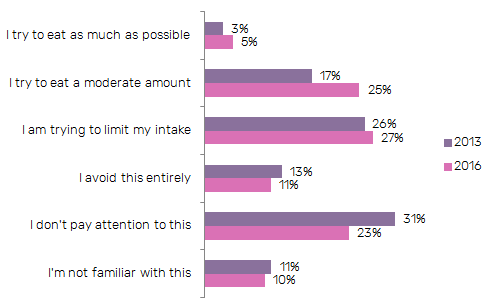