Russian stocks and the rouble have fallen dramatically today as the market was left reeling by the latest round of US sanctions against Moscow.

The Moex index – the rouble-based benchmark of the Russian stock market that is a useful indicator of domestic investor sentiment – fell 8.7%, heading for its steepest dive since March 2014 when international penalties were instituted in the wake of Russia’s annexation of the Crimean peninsula.

Meanwhile, the dollar-backed RTS index dropped over 12%, suggesting that foreign investors are pulling away from Russian assets en masse. 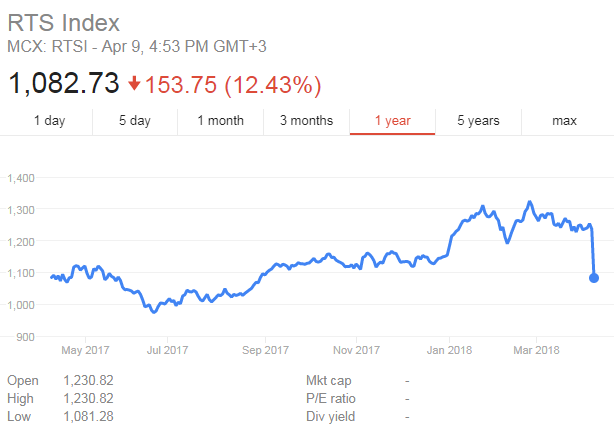 The rouble fell to 59.55 against the dollar at midday, its lowest level since late November, making it the worst performing emerging market currency in today’s session.

The market is reacting bearishly to new penalties unveiled by US President Donald Trump and his team on Friday, which are the toughest US sanctions on Russia to date.

Washington announced that seven prominent Russian businessmen, a dozen of their companies and 17 senior government officials were now banned from doing business with the US.

The crackdown is intended to target “those who benefit from the Putin regime and play a key role in advancing Russia’s malign activities”, according to a statement from the US Treasury.

The sanctions were imposed under laws passed for meddling in the 2016 US election.

The Russian government operates for the disproportionate benefit of oligarchs and government elites.

The Russian government engages in a range of malign activity around the globe, including continuing to occupy Crimea and instigate violence in eastern Ukraine, supplying the Assad regime with material and weaponry as they bomb their own civilians, attempting to subvert Western democracies, and malicious cyber activities.

Russian oligarchs and elites who profit from this corrupt system will no longer be insulated from the consequences of their government’s destabilising activities.

Trump criticised Russian President Vladimir Putin over the weekend, tweeting that there would be a “big price” to pay for the attack in Eastern Ghouta in Syria on Saturday evening.

Dozens of people were killed and hundreds injured in a suspected chemical attack that spread into bomb shelters.

The attack is alleged to have been carried out by the Syrian state, and Trump said that he held Russia and Iran responsible for backing the Syrian President Bashar al-Assad.

This is one of the few times that Trump has directly spoken out to condemn Putin, and has stoked the market’s fear that relations between the two states will continue to deteriorate. It also raises the possibility of a US military response in Syria.

Of the Russia oligarchs and businesses on the US sanctions list, the billionaire Oleg Deripaska was the hardest hit.

His aluminium company Rusal – which controls 7% of the global supply – saw its shares plunge 50.2% in Hong Kong, where it is listed. This effectively wiped out half its value. 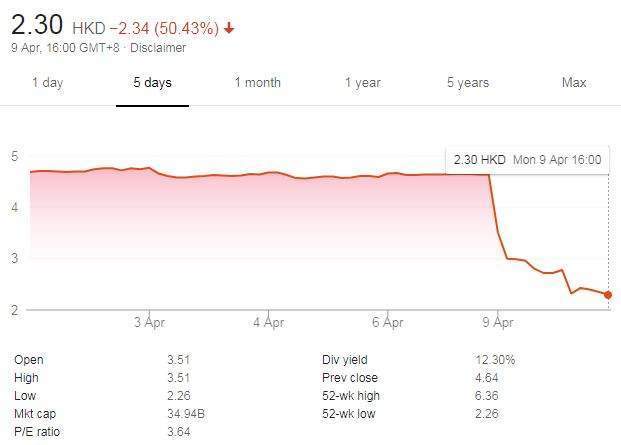 The sanctions mean that Rusal faces losing access to the US market, which made up 14% of its revenue last year.