Last year Alibaba’s sales on Singles Day, also referred to as Double Eleven, reached a record $18bn, an increase of 32 percent on 2015.

Will sales increase again this year?

Since launching in 2009, Singles Day, aptly named to imply anti-Valentine’s Day sentiment, has generated more and more revenue every year. 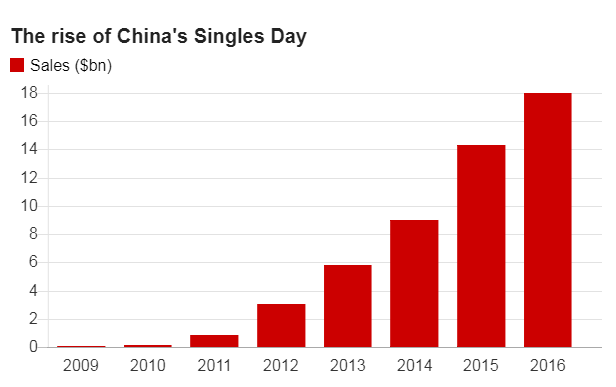 China’s Singles Day success last year dwarfed the biggest events in the retail calendar, with consumers shelling out more than triple the $5.9bn they spent on Black Friday, Cyber Monday and Thanksgiving combined in the US.

A significant contributor to China’s economy, the majority of consumers — 85 percent — made their purchases on their mobile phones in 2016.

Andrew Busby, a UK-based retail analyst, told Verdict that the increase in mobile and online payments makes it even more likely that Singles Day sales will increase again this year.

I fully predict that sales on Singles Day this year will top last year. There is no slowdown in online especially mobile online which continues to grow. China are the leading digital innovators — just look at Alipay.

What to expect this year

Singles Day online spend will hit $1.7tn by 2020, according to the US investment bank Goldman Sachs.

More than 60,000 international brands are expected to participate, data from the Alibaba Group revealed.

While Singles Day sales look set to beat last year’s record,  Sofie Willmott, a senior retail analyst at research firm GlobalData told Verdict that the event has not captured the interest of the UK market just yet.

British retailers and consumers have built up Black Friday as the huge seasonal shopping event. We are already hearing about what Black Friday deals UK retailers are going to be offering. I can’t see Singles Day becoming as big as Black Friday.

I think it is important for UK retailers who operate internationally and have a market in China to get involved in Singles Day events. Topshop, which already has a presence on large Chinese e-commerce websites like Shangpin, has shown how successful UK retailers can be when they participate in Singles Day.

Retailers like Ted Baker, Hobbs and Whistles with a strong British heritage could use the Singles Day platform to leverage their brand image and drive their sales forward.

Other retailers including one of Alibaba’s main rivals JD.com have also jumped on Singles Day to boost their sales figures.

In order to compete with Alibaba by expanding its reach, JD.com has struck around 50 deals with the likes of Tencent, the world’s fifth-largest internet company by revenue and Baidu, the Chinese search engine.

There are still questions to be answered

Retail analysts have cast doubt on the accuracy of Singles Day numbers, amid claims of inflated sales data.

The measurement criteria is the subject of a long-running probe by the US Securities and Exchange Commission.

As well as issues relating to revenue figures, Singles Day shines a light on China’s online shopping market’s wider problem with merchants passing off counterfeit goods as the real thing.