For the first time in nearly a decade, NASA astronauts will launch from US soil to the International Space Station (ISS). The historic moment will also mark the first time humans have travelled to orbit via a commercial spacecraft – in this case, SpaceX’s Crew Dragon capsule. Here’s how you can watch the SpaceX astronaut launch and what time it will take place.

The mission, known officially Demo-2 but dubbed ‘Launch America’, has been six years in the making for SpaceX and even longer for NASA.

In 2011 NASA retired the Space Shuttle, its previous means of astronaut transportation. Since then its astronauts have been reliant on Russia’s Soyuz spacecraft to travel to and from the ISS at the cost of some $80m per seat.

To end this dependency, NASA created the Commercial Crew Program, which has seen the space agency partner with private companies SpaceX and Boeing to assist its space exploration aims.

SpaceX had to successfully complete key tests before getting to this stage. In March 2019, an unmanned Crew Dragon capsule docked with the ISS and returned to Earth safely during the Demo-1 mission. It has since carried out an in-flight emergency abort test in January of this year.

Today’s test mission is the final key mission. If successful, SpaceX will receive certification from NASA to carry out long-term crewed missions to space. It will also signal a new era of commercial space travel.

SpaceX astronaut launch at a glance

What time is the launch?

Where is Crew Dragon taking off from?

How can I watch it?

Who will be on board? 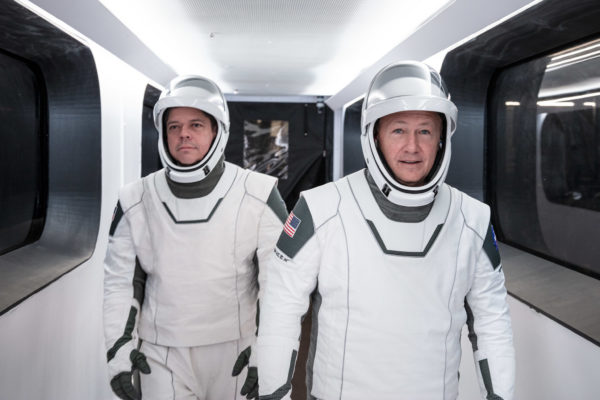 Weather permitting, SpaceX’s Falcon 9 rocket will take off at 4:33pm EDT (9:33pm BST). It will take approximately ten minutes for the astronauts, seated in the Crew Dragon capsule, to arrive into space.

The Crew Dragon capsule will then detach from the Falcon 9, with the reusable rocket returning to Earth where it will attempt to land on a drone ship in the Atlantic Ocean.

Crew Dragon will then spend the next 19 hours orbiting the planet. While the craft is designed to dock with the ISS automatically, Hurley has said they will use this time to practice flying the craft manually in case they are called upon to do so.

The pair will then join NASA astronaut Chris Cassidy and Russian cosmonauts Anatoly Ivanishin and Ivan Vagner on the ISS. Hurley and Behnken will spend up to four months aboard the space station before re-entering the docked Crew Dragon to return to Earth.