SpaceX’s Crew Dragon capsule has splashed down in the Atlantic Ocean, successfully completing the first unmanned test mission of a commercial crew capsule to the International Space Station (ISS).

Crew Dragon’s thrusters initiated the spacecraft’s deorbit burn at about 7:53am EST, before a 15-minute, 25-second burn sent the capsule hurtling back to Earth. Four main parachutes deployed, slowing its descent into the water.

Touchdown in the ocean was at approximately 08:45am EST. It will now be picked up by SpaceX’s GO Searcher recovery ship. 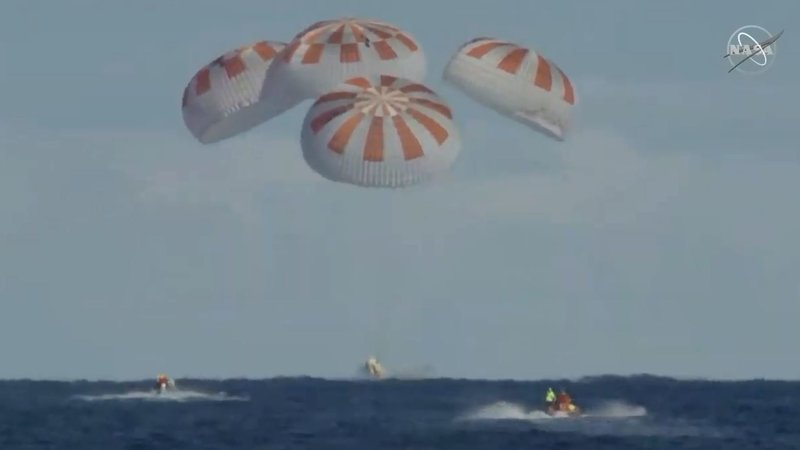 Crew Dragon splashing down in the Atlantic Ocean. Credit: NASA

It follows Crew Dragon’s successful detachment from the ISS around six hours before. A series of autonomous manoeuvres pushed the craft away from the ISS and positioned it for re-entry.

There had been fears that the capsule’s asymmetrical shape could cause Crew Dragon to roll out of control during re-entry.

Crew Dragon has spent the past week attached to the ISS. Although no humans were on board, Crew Dragon delivered supplies to the ISS and carried Ripley, SpaceX’s astronaut test dummy, and an Earth plushie toy.

Ripley was sent back to Earth along with research samples, while the Earth toy and supplies remained on the ISS.

Departure Confirmed! At 2:32am ET, @SpaceX's #CrewDragon spacecraft undocked from the @Space_Station. The spacecraft is slowly maneuvering away from our orbital laboratory into an orbital track that will return it and its cargo safely to Earth. Watch: https://t.co/ZuxLDtzW9c pic.twitter.com/LjSzWjyBOY

“Today’s successful re-entry and recovery of the Crew Dragon capsule after its first mission to the International Space Station marked another important milestone in the future of human spaceflight,” said NASA Administrator Jim Bridenstine.

“I want to once again congratulate the NASA and SpaceX teams on an incredible week. Our Commercial Crew Program is one step closer to launching American astronauts on American rockets from American soil. I am proud of the great work that has been done to get us to this point.”

The success of the Crew Dragon landing marks a major milestone for NASA’s Commercial Crew Program, which will see commercial space partners SpaceX and Boeing sending astronauts to the ISS.

It will be first time astronauts have been sent from US soil since NASA retired its own crew capsule, Space Shuttle, in 2011.

NASA has been reliant on Russia’s Soyuz modules to transport its astronauts to and from the ISS for the past eight years.

Need a recap of the @SpaceX #CrewDragon first flight test so far this week? Here's a look at what has happened and a look inside the spacecraft itself. Dragon departs @Space_Station on March 8. More on this mission: https://t.co/o5AndPXqcy pic.twitter.com/zjqqPAwBPs

Following the successful re-entry and landing of Crew Dragon, NASA and SpaceX will pore over the test data and carry out analysis of the recovered craft.

SpaceX then faces a final, big test in June. Its Crew Dragon spacecraft will carry out an unmanned in-flight abort test to prove that the passenger capsule can safely separate from the Dragon Heavy rocket during a failed launch.

If all goes to plan, NASA intends to send astronauts to the ISS aboard the Crew Dragon a month later – although given the temperamental nature of space launch dates, this is likely to be pushed back.

“Although this mission was unmanned, its criticality in helping the commercialisation of low earth orbit will have a profound impact on humanity,” says Tony Cole, a member of NASA’s Advisory Council.

“This same ship will ferry astronauts to the Space Station perhaps as soon as later this year, once again marking a milestone since it will be a US commercial company sending astronauts into space,” he told Verdict.

“It’s also quite likely that we will have our first space tourist by the end of this year or early 2020. This is a major step for mankind and we should remember that demand, like it has for many industries, can drive supply of additional capabilities that could ferry people to the Moon and beyond.”

Boeing will also conduct an unmanned ISS mission and abort mission over the coming few months, with a crewed mission targeted for August 2019.

For now, though, NASA will continue to rely on the Soyuz capsule. On 14 March, two American astronauts and a Russian cosmonaut are set to join the crew aboard the ISS. The Soyuz MS-12 spacecraft will launch from Baikonur Cosmodrome in Kazakhstan at 3:14pm EST.