The Spotify share price has fallen sharply at the US market open in New York after the company posted underwhelming first quarter results last night — Spotify’s first earnings release since its market debut in April.

In a sign that tech investors are still demanding big growth numbers from companies big and small, the Spotify share price ditched around 10% on results broadly in line with expectations.

Spotify — which launched its music streaming service in Europe ten years ago — made an unorthodox direct listing on the New York Stock Exchange last month and saw its shares climb around 14% until today’s sell-off.

The listing valued Spotify at around $26 billion and it’s now valued at around $30 billion. 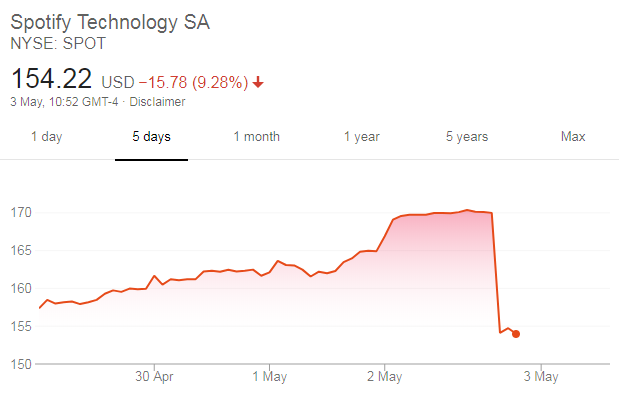 Analysts put the sell-off down to slow growth in North America, one of Spotify’s key regions for expansion but where it’s also up against entrenched tech giants Apple, Amazon, and Google.

Investors are also fretting over the company’s ability to turn its free music listeners into paying subscribers.

We don’t see any meaningful impact of competition. When we look at this, we don’t really think that this is a winner-take-all market. In fact, we think multiple services will exist in the market and we are all in a growing market.

Spotify is one of the largest music subscription services in the world, claiming to have some 75 million paid subscribers (an increase of 45% on the same three months last year), compared with Apple Music’s 40 million.

The company also boasted 170 million monthly active users over the last three months, up 30% on the same period last year.

Spotify said net sales rose 26% to €1.1 billion for the three months ending in March, meeting analyst estimates (the company — founded in Sweden — will continue to report in euros).

Operating losses narrowed to €41 million, from €139 million in the same period a year ago. This was better than the €65 million loss that analysts expected.

Earlier this month it was reported that Sony Music sold approximately 50% of its shares in Spotify during the streaming company’s first month on the New York Stock Exchange.

It’s thought Sony cashed in to the tune of $750 million.

Shares in Snap — the parent company of disappearing messaging app Snapchat — hit a new low this week after it reported a dip in daily active users, wiping more than 20% from the value of the company and pushing it below $11 for the first time.

Snapchat has struggled to compete with Facebook’s Instagram in recent months as it battles to keep users following an unpopular interface redesign at the beginning of the year.

Snapchat recorded average daily visitors of 191 million for its first quarter as a whole — though that was still above the average of 187m in the fourth quarter of last year. 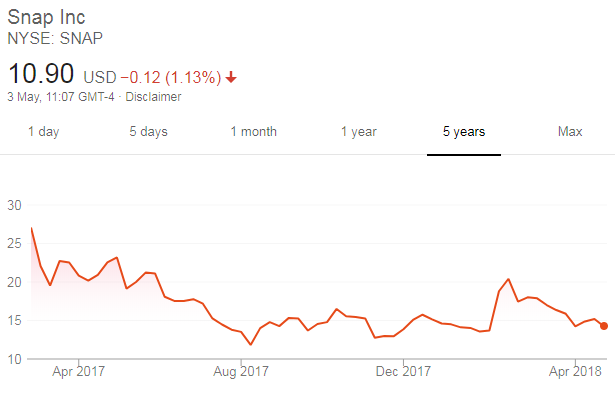 Blue Apron today revealed it continued to lose customers and sales during the first quarter but pleased investors by narrowing losses and cutting operating expenses.

The New York-based company took in just $196.7 million in revenues in the three months to end of March, down almost a quarter from the same period a year ago. 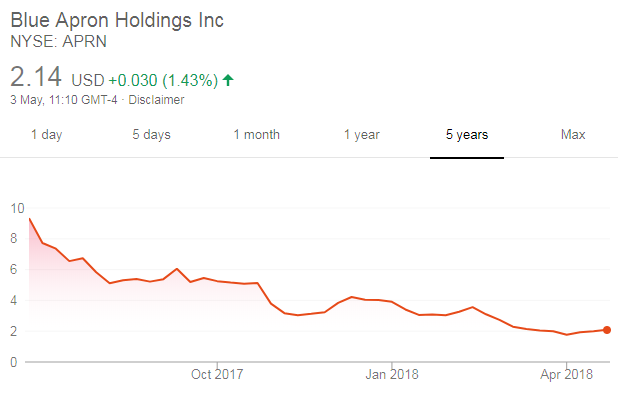 Investors and analysts are worried file-sharing company Dropbox might have already peaked after its March market debut.

Dropbox shares are up 38% since March but have struggled to hold onto highs in recent weeks. 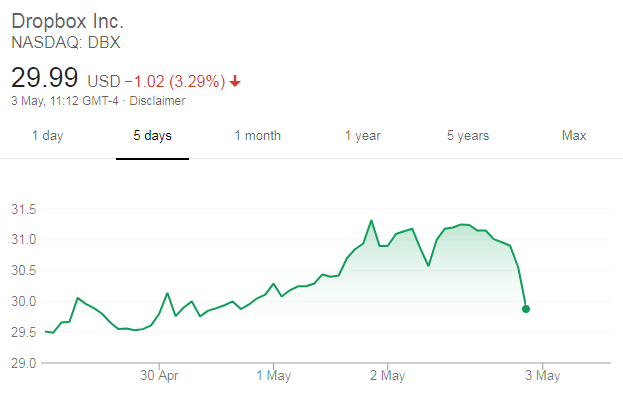