The Bank of England (BoE) has published the results of its latest stress tests of the UK’s biggest lenders, with this year’s billed as the toughest the BoE has done since it began testing in 2014.

All of the high street lenders tested — Barclays, HSBC, Lloyds, Nationwide Building Society, Royal Bank of Scotland (RBS), Santander, and Standard Chartered — have passed, with Barclays and RBS moving up to a passing grade after failing last year.

RBS — still 70 percent taxpayer-owned — was the most closely watched after it was last year forced to sell assets to raise an extra £2bn of capital.

Both  that Barclays and RBS fell below their systemic reference points however, the capital ratios required to withstand shocks to the financial system without needing a government bailout, based on end-2016 figures.

The Bank also examined the impact of the UK’s exit from the European Union and concluded that even a disorderly Brexit would be no worse than the economic stresses the banks were asked to pass this time around.

Speaking at a press conference this morning Bank of England governor Mark Carney said the Bank would be able to support the UK banking sector if Brexit goes badly.

But at disorderly Brexit would still have an economic impact on households and businesses. He said:

There will be some pain associated with that.

Carney added that a no-deal Brexit would be undesirable for everyone involved.

Ever helpful, the Bank of England offered a checklist of items to mitigate the impact of Brexit which included:

The Bank also announced it will raise the counter cyclical buffer, measure designed to add extra resilience while the sun is shining, from 0.5 per cent to one per cent by November 2018 and said its Prudential Regulation Authority (PRA) will make an announcement on authorisation requirements for EU bank branches, mainly in the wholesale space, operating in the UK after Brexit before the end of the year.

What are the stress tests?

Introduced in the wake of the financial crisis, the annual stress tests are meant to probe whether banks’ balance sheets can withstand major shocks to the financial system — such as a housing market collapse.

Many have said this simulation is worse than the 2008 financial crisis and its aftermath.

The tests cover two scenarios, as the BoE explains here: 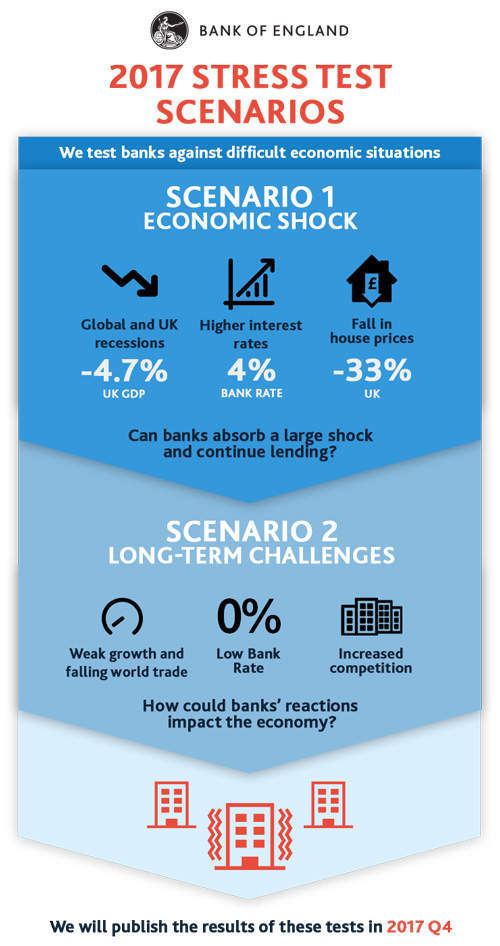 Source: The Bank of England

Alongside the annual cyclical scenario, the BoE for the first time is running an additional exploratory scenario every other year.

This considers how the UK banking system evolves in an environment of weak global growth, persistently low interest rates, stagnant world trade and cross-border banking activity, increased competitive pressure on large banks from smaller banks and non-banks, and a continuation of costs related to misconduct.

The test has a seven-year horizon to capture these long-term trends.