Subscriptions of feature phones – stripped-back, affordable mobiles – in Tanzania will account for 70% of total handset subscriptions in 2019.

However, smartphones are growing rapidly in the country and are set to surpass feature phones by 2024. In fact, smartphones in Tanzania will grow at a relatively fast compound annual growth rate of 19% and will account for more than 30 million subscriptions by the end of this forecast period. 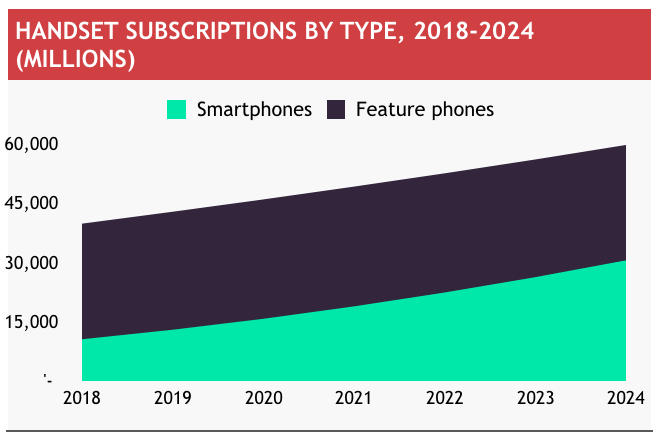 Furthermore, telecom operators are increasingly offering affordable 3G and 4G smartphones to stimulate mobile data usage and thus future revenue. For instance, Tigo offers the Tecno S3 3G smartphone for TZS67,500 (US$29.04). Additionally, the mobile operators are offering data-centric plans including free access to OTT applications such as WhatsApp, Facebook, Instagram, Twitter and YouTube. For instance, Tigo offers daily, weekly and monthly plans for only for social networks called “Social Packs” which are priced from TSZ1,000 (US$0.43).