Good morning and welcome to Tech Report Weekly 10 August. This week in tech it seems as though tensions between the US and China will continue to escalate – with TikTok reportedly preparing to sue the Trump administration over its executive order. Another Chinese tech firm caught in the crossfire is Tencent, which last week became the target of a US executive order banning American companies from doing business with its messaging app WeChat. This week it posts its latest quarterly results.

We’ll also be taking a deeper look at TikTok and the US-China trade war in this week’s Spotlight. The Verdict team has also highlighted some of the top technology journalism we’ve been reading from around the web, as well as key quotes, news and features from our own reporting. If you’d like all of this sent straight to your inbox every Monday at 7am, subscribe here.

TikTok hits back at Trump as Sino-US tensions escalate

What’s happening: TikTok is reportedly planning to sue the Trump administration over its executive order, while Twitter has become an unlikely contender for TikTok’s US business.

Why it matters: One thing is certain about Donald Trump’s presidency – expect the unexpected. Despite this, last week’s executive order against Tencent, which prevents US firms from doing business with its WeChat messaging app, took many by surprise. The app, used by more than a billion people each month, has small reach in the US and many in the West have never heard of it.

TikTok, a household name in America, has been hit with a similar executive order. But according to the news site NPR, TikTok is planning to sue the Trump administration as early as Tuesday, arguing that the executive order is unconstitutional and the justification on national security grounds is baseless. Microsoft has been in talks to acquire the US arm of the popular video-sharing app, but this weekend social media firm Twitter threw its hat into the ring. According to the Wall Street Journal, Jack Dorsey’s company has held preliminary talks about a “combination” with TikTok. The two firms declined to comment. Microsoft is considered the frontrunner due to its size and resources. But with Trump eyeing a clampdown against more Chinese companies, many will be paying close attention to Washington this week and wondering, “who’s next?”

How to follow it: We’ll be tracking this story throughout the week – visit verdict.co.uk for all the latest.

Why it matters: Tencent and Baidu will be hoping to provide some good news for investors after the US executive orders against Tencent and ByteDance wiped more than $75bn off Chinese tech stocks on Friday. Tencent, which has stakes in popular games such as Fortnite and PubG, saw its shares plummet by almost 7% on Friday. Analysts expect revenues of $16.1bn, up 24%, for the quarter. Trump has not singled out Baidu but the escalating US-China tensions saw its share price drop by nearly 3% on Friday. Wall Street forecasts the internet and AI firm to post revenues of $3.7bn, down from $3.76bn a year ago.

In Japan, SoftBank will be hoping for a return to profitability after the firm reported a record $12.7bn annual loss in the previous quarter, as the pandemic compounded bad investments in the likes of WeWork. In the US, ride-hailing firm Lyft posts earnings in a quarter where coronavirus shrank demand for taxis, while investors will be looking to see whether the need for work-from-home technology boosted Cisco’s bottom line.

How to follow it: SoftBank posts Q1 earnings on Tuesday. On Wednesday Cisco publishes Q4 results while Lyft and Tencent report Q2 earnings. The following day Baidu reveals its Q2 financials. We’ll be covering the highlights throughout the week – visit verdict.co.uk for all the latest.

Why it matters: From smart fridges to smart factories, there are now more internet of things (IoT) devices on the planet than people – and that upward trajectory is only set to continue. Internet of Things World will explore all avenues of this exploding industry, from industrial IoT to edge computing to IoT security. It will also explore how high-speed 5G networks are enabling more advanced technologies such as driverless cars and remote surgery. The three-day event will hold panels discussing the importance of 5G interoperability, connected intelligence and more.

How to follow it: The event runs Tuesday to Thursday. Some of the online conference is available free, while there are paid tiers for further access. You can register here.

Fletcher Previn: “Technology is on the front lines of this crisis” 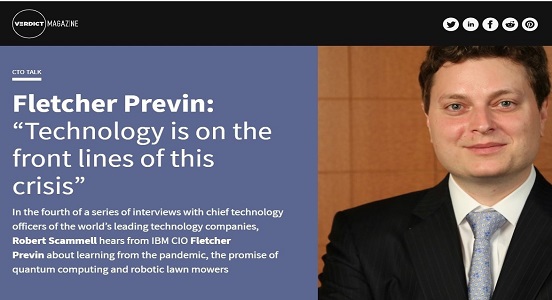 In the fourth of a series of interviews with chief technology officers of the world’s leading technology companies, Robert Scammell hears from IBM CIO Fletcher Previn about learning from the pandemic, the promise of quantum computing and robotic lawnmowers.

Spotlight on: TikTok and the US-China trade war

The days of US President Donald Trump’s one-man war against Huawei appear to be over, with the US gaining an apparent victory, but now attentions are turning to new battlegrounds in the US-China trade war. And last week, it has for the most part been about Chinese social media giant TikTok, which is being pressured to sell its arm covering the US to Microsoft in a bid to prevent American user data being exposed to the all-seeing eye of the Chinese state.

Or so the US claims: in all these allegations, there is never proof that the Chinese government is able to access user data, but under its law it may be able to, so the Trump administration assumes it is. However, this week efforts against TikTok were stepped up with an executive order banning transactions by US organisations with its parent company ByteDance from 20 September, which would effectively ban the company from the US. This alone could be interpreted as simply an attempt to force ByteDance to go through with the sale to Microsoft, if it weren’t for the fact that Trump also issued a similar executive order against Tencent-owned WeChat at the same time. This surprised many, and caused outraged concern until the Trump administration clarified that it didn’t extend to all entities owned by Tencent – as this would include a myriad of high-profile US companies, including Reddit and Discord.

The combined impacts of these two executive orders could be devastating for many US companies that do business with China, particularly Apple, which makes a sizeable chunk of its revenue in the country. But there are more plans on the horizon, in the form of the proposed Clean Network, essentially a bid to segment US internet by the Trump administration that has prompted serious concern from commentators.

With so many developments in such a short time, it is unlikely that this is it for Trump’s tech-related sanctions against China. And the country may also opt to retaliate. But for the tech industry, which is so globally-minded, these are unsettling times.

Instagram Reels in Gen Z, but can it win out against TikTok?

Uber delivery revenues up 103% but ride-hailing decimated by pandemic

“There is no security justification for banning an app merely because it is owned by a Chinese company. Allegations of security risks should be backed by hard evidence, not unsubstantiated innuendo.”

– Daniel Castro, vice president of the Information Technology and Innovation Foundation, on the TikTok and WeChat bans.

Why hundreds of mathematicians are boycotting predictive policing

Courtney Linder takes a deep dive into the problematic world of predictive policing to identify why its use is proving so controversial among US academics in this piece for Popular Mechanics.

The stress of leading a start-up through the pandemic

The BBC’s Sooraj Shah explores the challenges and rewards of steering a tech startup through the pandemic.