Good morning and welcome to Tech Report Weekly 9 November. This week in tech Tencent, Lyft and Beyond Meat report their latest earnings. We’ll also get an update on Disney+’s latest subscriber numbers following a lockdown-driven surge earlier this year. Apple is holding its third event in as many months – we speculate what products might be announced. And finally, MPs will debate the growing threat of online scams, and what more can be done to protect consumers.

In this week’s Spotlight we reflect on how the social media platforms did in combatting misinformation during a febrile US election. The Verdict team has also highlighted some of the top technology journalism we’ve been reading from around the web, as well as key quotes, news and features from our own reporting. If you’d like all of this sent straight to your inbox every Monday at 7am, subscribe here.

Why it matters: Gaming giant Tencent was likely paying closer attention to the US presidential election result than most Chinese companies, having found its messaging app WeChat the target of sanctions by the Trump administration earlier this year. It’s unclear exactly what a Biden administration will mean for US-Sino relations, but there will almost certainly be less unpredictability than under his predecessor. This week the company will be hoping to continue its run of growth, with analysts predicting its revenue and earnings to rise 33% and 21% respectively this year. In the previous quarter, it reported revenue of $16.53bn, beating analyst expectations.

Meanwhile, Walt Disney will reveal its latest Disney+ subscriber numbers in its quarterly results this week. The streaming service has been a bright spot for the entertainment behemoth in a year where the pandemic has shuttered theme parks and movie studios. Rival Netflix saw subscriber growth slow after a surge in the first half of the year, which it attributed to a “pull-forward effect”. Will Disney+ experience the same phenomenon? Elsewhere, Lyft reports earnings hot off the trails of winning the Proposition 22 ballot measure, which means it and rival Uber do not need to class their drivers as employees. Plant-based meat company Beyond Meat and investment giant SoftBank also provide earnings updates.

How to follow it: Beyond Meat posts Q3 results on Monday. Lyft reports Q3 earnings on Tuesday, while Tencent and Disney report Q3 and Q4 results on Thursday.

What’s happening: Apple holds its third event in as many months to make another product announcement.

Why it matters: So far this year Apple has held two events – one to unveil the iPad Air and Apple Watch, while another revealed the iPhone12. That leaves the Macintosh computer as the likely star of the latest live event, dubbed ‘One More Thing’, which will be held remotely due to the pandemic. The $2tn company is expected to reveal the first Mac range containing its in-house-designed chips, based off Arm’s semiconductor technology. Known as Apple Silicon chips, the new architecture is a custom design, as opposed to buying off-the-shelf processors from Intel, which it has done since 2005. It’s unclear yet which Mac models containing these new chips will be first to hit the shelves, but Apple is expected to provide a launch date and price tag at the one-day event.

Apple could also make announcements about its latest Mac operating system, which has been in beta since the summer. Another option is its Airtags, a small wireless tracker to attach to belongings, or Airpods Studio – an over-the-ear version of its popular wireless headphones. However, don’t expect these to be the main events, and don’t rule out the possibility that there will be a surprise announcement that analysts haven’t seen coming.

How to follow it: The event takes place on Tuesday. You can stream it live from 6pm UK time on YouTube.

What’s happening: Members of Parliament discuss online scams and what can be done to protect consumers.

Why it matters: Scammers have always been opportunists, looking to take advantage of the latest trends to maximise their takings. The pandemic, with the heightened anxiety it brings and an increased number of people spending time online, has proven fertile ground for fraudsters. From impersonating the test and trace service to emails offering fake access to ‘Covid-19 relief funds’, cybercriminals have been busy. Between March and June more than 16,000 people reported that they had fallen victim to online shopping fraud in the UK, according to Action Fraud. In total, they incurred losses amounting to £16.6m.

This has caught the attention of Yvonne Fovargue, the Labour MP for Makerfield, who has registered a Westminster Hall debate on protecting people from online scams to take place this Tuesday. Such debates see backbenchers, frontbenchers from the third largest party and the Opposition, as well as a government minister, take part. Fovargue has previously submitted written questions to the government relating to internet fraud, including what action is being taken to tackle user-generated scam content on online platforms.

How to follow it: You can follow the debate on Parliament TV on Tuesday at 4pm UK time.

Back to work? C-suite plans for a return to the office 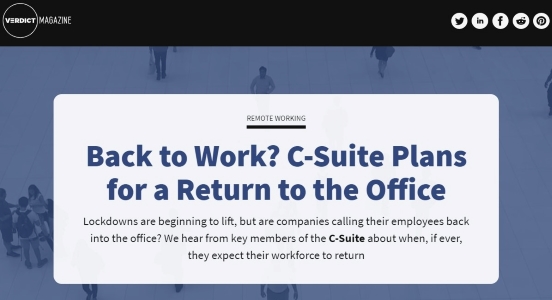 Lockdowns are beginning to lift, but are companies calling their employees back into the office? We hear from key members of the C-Suite about when, if ever, they expect their workforce to return.

Spotlight on: Social media vs Trump

The presidential election is over, but it will come as no surprise to many that Donald Trump has taken to Twitter in an attempt to discredit the results. In the aftermath of the 2016 presidential election, social media giants faced criticism for their failure to adequately stop the spread of misinformation on their platforms, a factor many have said played a part in growing political polarisation and the rise of the alt-right.

In light of this, social media companies have faced increasing pressure to improve their handling of fake news surrounding both the US election and Covid-19. In what may have acted as a turning point, social media platforms proved it was in fact possible to take active steps to stem the barrage of false information surrounding the virus as it emerged online. Twitter introduced new labels for potentially misleading or harmful information and limited the extent to which such tweets can be shared. Facebook also introduced labels for misleading content and has employed fact checkers to help combat the issue. Both sites have also removed fake accounts used to spread misinformation.

Overall, Facebook and Twitter so far appear to have emerged from the 2020 election in a better light than four years ago, having flagged Trump’s baseless claims of election fraud. But that is not to say their responses have been without flaw. Although Facebook has become more vigilant in labelling misinformation, it still allows such content to be shared, and does not hide it from users. Meanwhile Twitter’s approach of hiding content that violates its newly introduced civic integrity policy still takes some time, meaning that messages still have an opportunity to spread far and wide when shared by accounts with large followings, such as Trump. It remains to be seen whether this marks a turning point in social media platforms’ response to misinformation, and whether this will have an impact on how it is tackled during future political events. But for some, the response of social media giants may be “too little too late”, raising questions as to why actions taken now could not have been taken sooner.

Ant Group IPO on ice for six months – here’s why

“Cyberwarfare has been democratised, meaning not only massive nation states like Russia and China can perform these attacks, but smaller, rogue states such as Iran, Syria, Turkey and North Korea can too. The goal also isn’t to skew the result in favour of either party – the threat actor’s favourite candidate is chaos.”

Work from anywhere: Is 2021 the future of work?

For ZDNet, Greg Nichols explores the work trends likely to dominate 2021 and possibly the future of work as we know it.

A vicious culture war is tearing through Wikipedia

Wired’s Omer Benjakob delves into the “edit warring” being waged on Wikipedia.