As US voters head to the polls, Trump claimed that a Supreme Court decision to give more time for postal ballots to arrive in Pennsylvania was “very dangerous”.

On Twitter the mail voting claim is hidden and replaced with a warning label. It states: “Some or all of the content shared in this Tweet is disputed and might be misleading about an election or other civic process.” 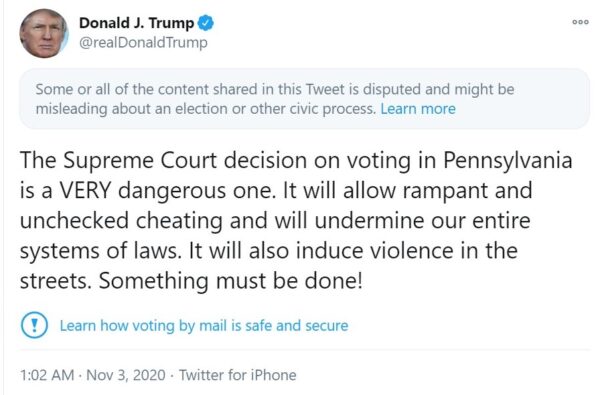 Trump, who has previously voted by mail-in ballot, has repeatedly made baseless claims that postal votes lead to voter fraud.

Facebook did not hide the post but instead attached a fact-checking disclaimer. It read: “Both voting by mail and voting in person have a long history of trustworthiness in the US. Voter fraud is extremely rare across voting methods.”

Both social media companies have ramped up their efforts to protect the integrity of the election after they were widely criticised for allowing disinformation to spread in 2016.

Facebook has suspended political group recommendations and has launched an election operations centre that has 40 teams monitoring for threats.

Twitter has banned political advertising and has stepped up its efforts to hide false political claims.

Both firms have put measures in place to label posts from candidates and campaigns that declare a premature victory, with Twitter going further by including tweets with more than 25,000 engagements from accounts with more than 100,000 followers.