The latest Tesla release completes a childish S3XY naming convention, but a lack of quirky features may signal that the company is refocusing on profitability.

On 14 March the Tesla Model Y was announced. The vehicle is a seven-seat SUV crossover, an enormously popular style for the automotive industry at present.

Of particular note was that Tesla has decided to dial back the headline-grabbing features, which should finally rationalise the company’s chaotic production process.

Model Y should prove to be a sensible move for the company, as it has produced a more rational and considered product aimed at a very popular market segment. At a base price of $39,000 the vehicle also compares well with the fairly limited all-electric alternatives on the market.

Essentially a raised up and expanded version of the Model 3, the Model Y is an economy of scale decision that automotive manufacturers have been deploying for decades. The primary aim is to share parts and platforms across different models in order to keep down costs and to speed up vehicle production.

Also, Model Y is around 10% larger than the Model 3, shares its platform and 75% of its components. This is the kind of cost saving and reduced risk decision that Tesla investors and shareholders have been crying out for as the company has lurched from one concerning financial quarter to another.

This move by Tesla should help the company draw breath after a controversial year which saw its talismanic CEO, Elon Musk, fight through multiple scandals, from fines and court cases against the US Securities and Exchange Commission to embarrassing remarks and accusations on Twitter. 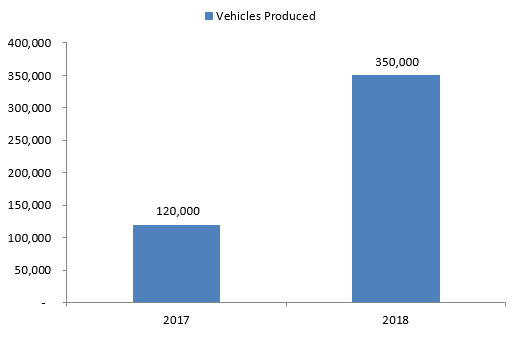 Model 3: a bumpy ride for investors

With its Model 3, Tesla has dramatically ramped up production but missed targets and has worried analysts with its financial results.

Production of the Model 3 has finally begun to hit the numbers that the company hoped for when it first received a staggering $1 billion in cash deposits for the vehicle and an estimated 500,000 reservations. Tesla is now producing around 5,000 vehicles a week on average.

Despite this good news, there have been other troubling announcements. In a complete U-turn, Tesla decided to close stores defying its own announcements only weeks earlier and opted to move some sales online only, caused analysts to alter their price targets for the company.

Further troubles came from Model 3’s reliability reports, with Consumer Reports moving the vehicle it into a category with other notoriously unreliable brands such as Land Rover, Maserati and Alpha Romeo.

Production issues led to hastily put together production lines, and despite the fact that, in theory, electric vehicles should be much more reliable than combustion engine vehicles, Model 3 has had teething problems.

However, despite these issues, the strengths of Tesla remain the same. Its customers overwhelmingly like their vehicles despite the reported issues and Tesla is still well ahead of the pack when it comes to producing premium and mid-tier electric vehicles, particularly in North America.