Global GDP could be boosted across some of the world’s biggest economies by $2trn by raising employment rates for the over 55s to match Swedish levels — the highest performing European Union country.

PwC’s Golden Age Index — a weighted average of employment, earnings and training across the world’s OECD countries — has found potential gains could rise as high as 16 percent of GDP for Greece and 13 percent for Belgium.

Iceland, New Zealand, Israel and Sweden lead the way — scroll down for the full OECD ranking

Iceland remains number one in the index, a position it has held since 2003.

Nordic neighbours Sweden and Norway also continue to do well with places in the top 10. Turkey maintains its position at the bottom of the index, having fallen 12 places since 2003.

For employers, flexible working and partial retirement options can pay dividends, as can redesign of the workplace to meet the needs of older workers. Flexible working policies can incentivise women to remain in work longer, so having the right policies in place will increase the employment rate of those over 55 and may help to reduce the gender pay gap which is shown to increase with age.

PwC has found a higher educational background is also associated with working later into old age.

More qualified older workers may be better able to adapt to technological changes, while the industries in which more qualified workers are employed could be better suited to working in later life.

How does the UK fare?

PwC estimates the UK could boost its GDP by around 4.2 percent (around £80bn) if the employment rate of workers aged over 55 could match that of Sweden.

There is a 12 percentage point gap between the employment rates of workers aged 55-64  in the UK and Sweden. 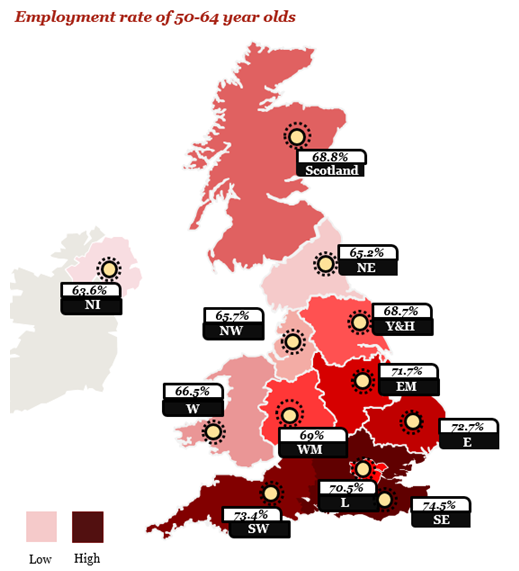 Across the UK older female workers have a lower employment rate than their male counterparts at 64.9 percent for 50-64 year-olds compared to 75.4 percent for males.

Across the UK, the South East of England has the highest employment rate of older workers aged 50-65 at 74.5 percent, compared to a UK average of 70 percent.

Northern Ireland has the lowest employment rate for older workers at 63.6 percent, compared to 66.5 percent for Wales, 68.8 percent for Scotland and 70.6 percent for England.

“While the UK’s absolute performance on our Golden Age Index has improved over time, it’s still scoring below the OECD average.

“As the number of people over 55 continues to grow steadily and life expectancy increases, the UK needs to make it as easy as possible for people to continue working for longer if they wish to do so.

“This would boost both GDP and tax revenues, so helping to pay for the increased health, social care and pension costs of an ageing population.

“Looking at employment rates for older workers across the UK reveals the areas that need the most focus, as well as symptoms of poor performance.