The HSBC share price has dipped after the London-based global banking giant posted a surprise fall in pre-tax profits for the first three months of the year, which the bank’s blamed on higher costs.

A $2 billion share buyback was not enough to support the HSBC share price as investors sent shares down some 3% in Hong Kong and down by over 2% in London at the market open.

Last year HSBC — Europe’s biggest bank by assets — paid more in dividends than any other major European or US bank and returned a total of $3 billion to shareholders.

HSBC posted a profit of $4.8 billion, down from $5 billion for the same period a year ago — falling short of analyst estimates. The bank did however post an uptick in revenue, adding 6% on last year to take its sales to $13.7 billion for the quarter. 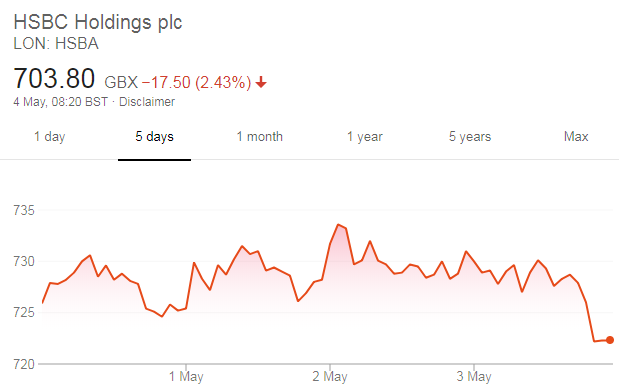 John Flint, who recently took over as chief executive of HSBC from Stuart Gulliver, said:

We continue to benefit from interest rate rises and economic growth, particularly in Asia. Our primary focus is to grow the businesses safely, and we have increased investment to deliver that aim.

HSBC is currently battling with a huge overhaul of its business that has made tens of thousands of the bank’s staff redundant in recent years.

Flint plans to continue his focus on China and double down on HSBC’s pivot to Asia — where the bank already makes more than 75% of its profits.

The ‘bad’ element was cost development where cost growth outstripped revenue growth. Cost efficiencies offset inflation and regulatory costs, and there was an incremental $400 million year-on-year growth due to investments in growth and digital.

Elsewhere at the bank, the former head of insurer AIA, Mark Tucker, became HSBC chairman in October, taking over from Douglas Flint.