The newspaper’s profits soared by two thirds in the first quarter of 2018, according to results posted today.

Trump refers to the company as “the Failing New York Times” and frequently takes to Twitter to criticise its coverage of him.

The Failing New York Times has a new publisher, A.G. Sulzberger. Congratulations! Here is a last chance for the Times to fulfill the vision of its Founder, Adolph Ochs, “to give the news impartially, without fear or FAVOR, regardless of party, sect, or interests involved.” Get…

….impartial journalists of a much higher standard, lose all of your phony and non-existent “sources,” and treat the President of the United States FAIRLY, so that the next time I (and the people) win, you won’t have to write an apology to your readers for a job poorly done! GL

Much of this growth was due to increased numbers of digital subscriptions. The NYT had a 25.5% increase in the first the months of 2018 from the same period last year.

In the first quarter, we saw increases in revenue and overall profitability and continued solid growth in our digital subscription business.

The strong demand for the high quality, independent journalism that The Times produces resulted in a 139,000 net increase in digital-only subscriptions for the quarter.

It seems that the NYT is still enjoying the effects of the so-called Trump bump that has breathed new life into many of the mainstream media outlets the President dislikes.

The failing @nytimes has been wrong about me from the very beginning. Said I would lose the primaries, then the general election. FAKE NEWS!

In the almost 18 months since Trump was elected, publications like the Washington Post and the Wall Street Journal received boosts to their page views and subscription numbers.

Cable news networks have been getting huge increases in viewers while most television channels are losing them.

It’s hard to read the Failing New York Times or the Amazon Washington Post because every story/opinion, even if should be positive, is bad!

The NYT itself saw its share price grow strongly since Trump won the presidential election on 8 November 2016. Shares jumped 4.8% this morning in pre-market trading in New York. 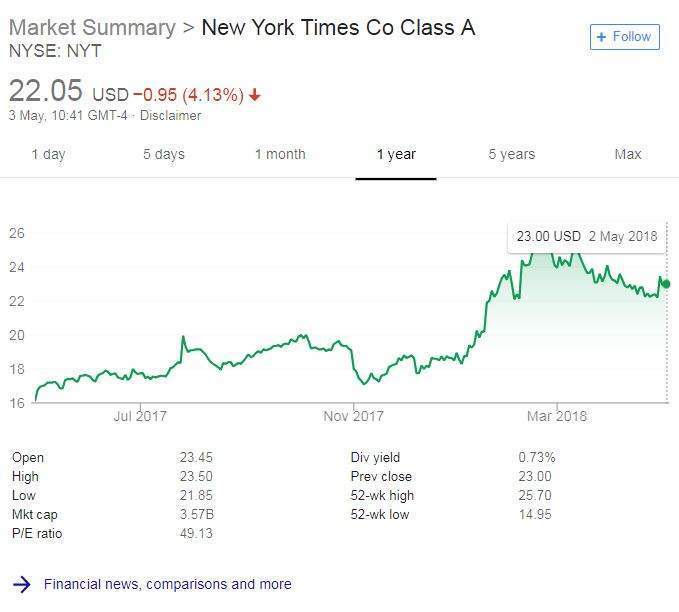 The Trump bump is attributed to the increased political volatility that characterises Trump’s presidency, which increases demand for news.

Those who dislike Trump have turned increasingly to media outlets which they feel to be critical of the President, with Trump himself highlighting which ones these are.