A transport modelling technology that uses artificial intelligence (AI) to simulate the movement of people and vehicles through cities is set to provide the foundation for future transport technologies such as driverless cars.

The technology, which is developed by London-based startup Immense Simulations, is provided as a Simulation as a Service platform, providing the ability to rapidly model the introduction of new services, technologies or approaches to a city without significant upfront costs.

This represents a step-change from traditional approaches to transport modelling, which pose a key barrier to the smooth introduction of new services, such as novel transport startups, and technologies, such as driverless cars.

“Mobility is changing fast but transport decision-making is slow and expensive, based on poor data,” explained Immense Simulations co-founder and CEO Robin North.

“Operators are facing increasingly low margins and both market and technology disruption, and consumers are expecting an ever more seamless service. This is a large-scale system problem that requires digital transformation to integrate siloed assets and empower effective decision-making.” 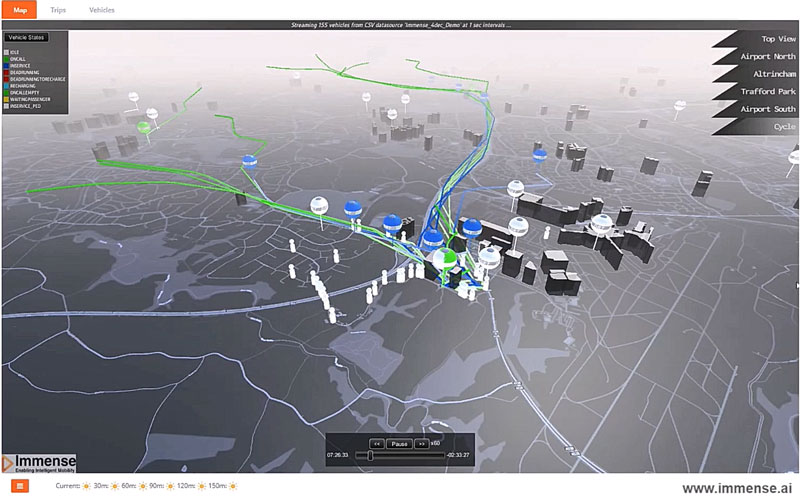 Modelling mobility hubs in the UK city of Manchester.

Transport modelling for the cities of the future

For all investors, the technology represents a key underlying element of future urban transport – suggesting significant growth potential as a result.

“Anyone who’s driven home after a bank holiday weekend – with over 15 million cars and 70,000 incidents on the road – can see the potential benefit of the Immense platform. By testing and simulating traffic, public agencies can plan and manage road use more effectively, allowing them to mitigate delays and reduce travel time.”

“We have witnessed the concept of the ‘smart City’ become more mature and see huge potential in Immense Simulations to disrupt the existing solutions on the market and transform how the industry works on simulation-related projects,” said Global Brain Corportation partner Naoki Kamimaeda.

“Smart transportation-related companies will definitely benefit from using Immense technologies and eventually it will make our society more efficient, comfortable and safe by reducing congestion and accidents and enhancing urban planning.”

Read more: In the future everything will have a digital twin, hopefully