US President Donald Trump has slammed bitcoin and other cryptocurrencies, saying he is “not a fan” and that they “are not money”. But did the Trump bitcoin tweet have any effect on bitcoin’s price?

In a thread of tweets yesterday, he took aim at “unregulated crypto assets”, saying they can facilitate criminal behaviour.

“I am not a fan of bitcoin and other cryptocurrencies, which are not money, and whose value is highly volatile and based on thin air. Unregulated crypto-assets can facilitate unlawful behaviour, including drug trade and other illegal activity….”

He also criticised Facebook’s Libra coin, a digital currency recently unveiled by the social media giant that is expected to launch in 2020.

“Similarly, Facebook Libra’s “virtual currency” will have little standing or dependability. If Facebook and other companies want to become a bank, they must seek a new Banking Charter and become subject to all Banking Regulations, just like other Banks, both National,” Trump tweeted.

Cryptocurrencies are known for their volatility, with the bitcoin price prone to price swings following statements by influential people.

Such swings are a daily occurrence for the bitcoin price, suggesting Trump’s bitcoin tweet had little impact on investors.

Other leading cryptocurrencies, such as Ethereum, also saw small gains following the Trump bitcoin tweet. Bitcoin’s value is up by more than 190% since the start of the year. 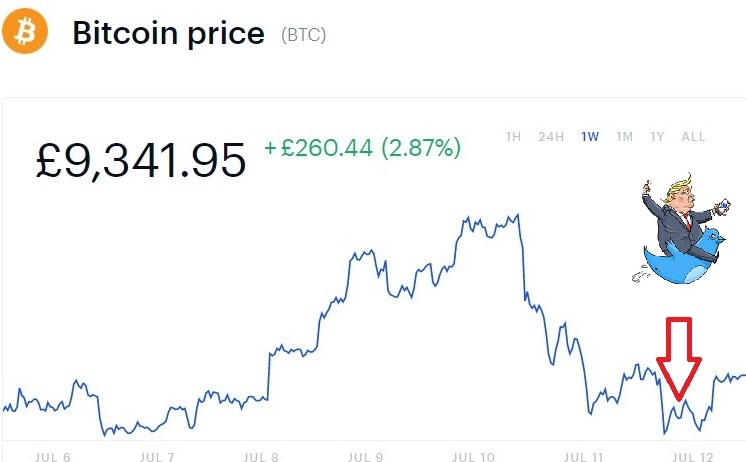 Trump is not alone in his opposition to Facebook’s Libra coin. The French finance minister Bruno Le Maire recently said that Libra cannot act as a sovereign currency.

Meanwhile, the chairman of the US Federal Reserve, Jay Powell, said this week that Facebook needed to resolve “serious concerns” over “privacy, money laundering, consumer protection and financial stability”.

It is the first time that Trump has publicly mentioned bitcoin, leading supporters of cryptocurrencies to claim victory in Trump’s bitcoin tweet.

“Achievement unlocked! I dreamt about a sitting US president needing to respond to growing cryptocurrency usage years ago. ‘First they ignore you, then they laugh at you, then they fight you, then you win.’ We just made it to step 3 y’all.”

Nigel Green, the founder and CEO of deVere Group, an independent financial advisory firm, said that Trump “is wrong and is placing himself on the wrong side of history on bitcoin and other cryptocurrencies”.

Citing tech companies such as Facebook getting involved in cryptocurrency, he said: “Does the President seriously think that traditional, fiat currencies are the way forward?”

Green did, however, agree with Trump that “Facebook’s new Libra project should be scrutinised”.

“Regulation is necessary as it will provide further protection for the growing number of people using cryptocurrencies, the less likely it will be that criminals will use these digital payment methods, the less potential risk there will be for the disruption of global financial stability, and the more potential opportunities there will be for higher economic growth and activity in those countries which introduce it.”

“The opinion of President Trump is no surprise”

Meanwhile, Richard Dennis, the founder and CEO of temtum, a next-generation payment platform, said Trump’s bitcoin comments were not surprising and were meant to protect the US dollar.

“There’s no hiding from the fact that cash and even gold and silver have been utilised for crime, completely untraceable, for thousands of years – yet cryptocurrencies are transparent in their very nature,” he said.

“Major banks are already integrating blockchain technologies to improve their processes and many are using forms for cryptocurrencies for cross border payments, increasing the speed and security, and reducing the cost of such transactions, which President Trump has not highlighted via Twitter.

“Bitcoin was created to provide anyone with a way to manage their own finances, make their own payments and store their own funds securely, all without central authorities or governments making huge profits, storing and selling data and being in complete control of our financial lives.

“The opinion of President Trump is no surprise as bitcoin continues its strong position.”