The tech contagion is spreading. It was revealed yesterday that the Cambridge Analytica scandal knocked $80 billion off Facebook’s market cap (adding up to a $100 billion loss since the start of February) and that investors’ concern has spread to other tech giants.

Nvidia, a chipmaker making strides in artificial intelligence and autonomous vehicles, said that it was suspending self-driving tests across the world after a fatal Uber accident last week in Arizona.

Its stock dropped 8% after the announcement. Tesla’s did the same thing after it said that it was sending investigators to a fatal car crash in California.

Stocks have continued to drop today and Amazon is suffering particularly badly.

By 11am in New York this morning Amazon had seen its shares fall by 7.3%. They subsequently rose slightly. 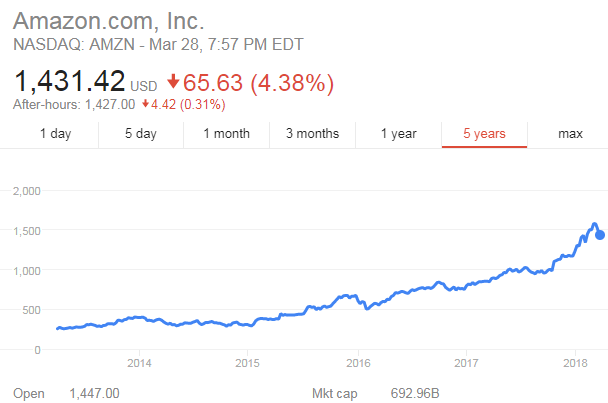 Amazon’s fall came after US political news site Axios reported that US President Donald Trump was determined to “go after” the e-commerce behemoth.

A source told the outlet that Trump was “obsessed” with trying to hobble Amazon after friends had told him it was damaging their businesses and “killing shopping malls and brick-and-mortar retailers”.

One way that Trump might try to restrict Amazon’s business is by forcing changes to their tax collection policy.

The news wiped out more than $50 billion in market value for Amazon. Representatives for Jeff Bezos (Amazon’s CEO) and Donald Trump have both so far declined to comment on the news.

However, it has not all been doom and gloom for the company, which has business in cloud computing, television, and music streaming and owns the brand Whole Foods.

Earlier this week, options traders made bullish bets that Amazon could beat out Apple in the race to a $1 trillion market cap. Amazon also has the highest proportion of “buy” ratings from stock analysts of all the major tech companies.

Its North America revenue jumped 42% to $37 billion, while international sales grew 29% to $18 billion.

Meanwhile, first quarter revenue guidance came in the range of $47.75 billion to $50.75 billion, above street estimates of $48.6 billion.

Amazon revenue has grown consistently because it is constantly re-investing most of the money it earns.