Emissions are now down 22.4% overall since 2012 following five years of decline.

This is according to energy use data released by the Department of Business, Energy and Industrial Strategy (BEIS), analysed by environmental news website Carbon Brief. 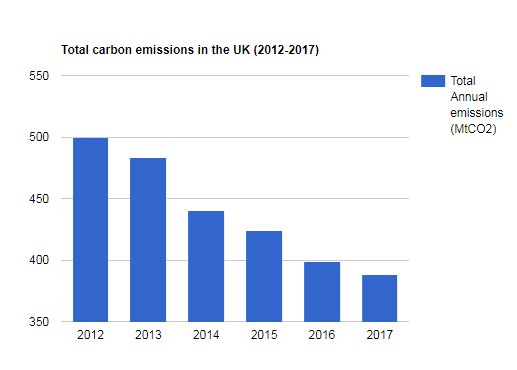 According to Carbon Brief, this year’s reduction can be attributed to a decrease in coal and natural gas use. Coal saw a reduction of 8.5 million tonnes of CO2, while gas also fell by 3.4 million tonnes.

This decline followed an increase of 18 million tonnes of CO2 caused by gas in 2016. BIES attributes this dip to less use of central heating thanks to milder winter.

The use of oil increased for the third consecutive year. It is now up 7 million tonnes of CO2 since 2013. However, this increase wasn’t enough to offset the improvements made in other areas.

The Department for Business, Energy, & Industrial Strategy will release its own findings later this month. 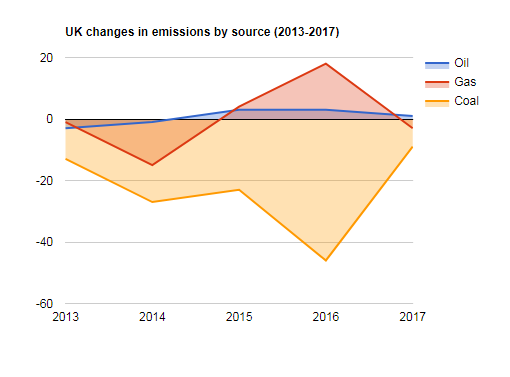 Recent declines show that the UK government is taking climate change seriously. Through the Climate Change Act, it vowed to reduce carbon production to 57% below the levels recorded in 1990 by 2030.

According to Carbon Brief, emissions are currently 38% below 1990 levels. This means that the goal of reducing levels by 37% by 2020 has already been met.

However, the Committee on Climate Change, an independent body that provides advice to Parliament on environmental issues, stated that more needs to be done in order to meet the fourth UK carbon emissions target of 51% by 2025.

The Committee on Climate Change states:

“To meet future carbon budgets and the 80% target for 2050, the UK will need to reduce emissions by at least 3% a year from now on. This will require the government to apply more challenging measures.”

“This year, we will set out how government will support the transition to almost all cars and vans being zero emission vehicles by 2050,”

“I am determined that we will do what it takes to ensure our air is clear and safe for the future.”