After nearly a century in the UK Unilever — the maker of Marmite and Dove soap — is relocating its headquarters to the Netherlands.

However, the company — which denied the decision was related to the UK’s departure from the European Union — said its 7,300 people in the UK and 3,100 people in the Netherlands will be largely unaffected by the changes.

Last year the company was approached by US food giant Kraft Heinz with a £115 billion takeover bid — the company has since been looking to streamline its operations. 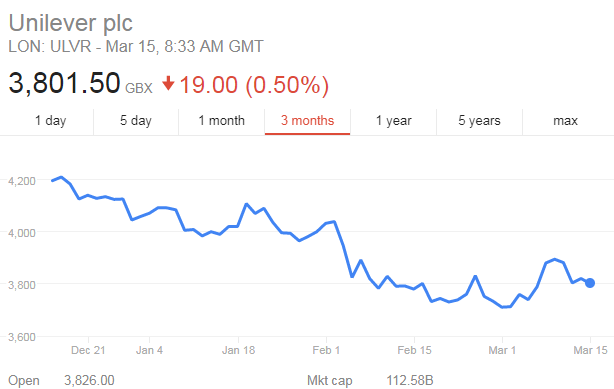 Unilever’s chief executive Paul Polman told BBC Radio 4’s Today Programme the company is moving its headquarters to Rotterdam because it will make it simpler, more focused and “more agile” and Unilever’s business is restructuring and will have three divisions, two of which will be in the UK.

The idea here obviously is to build long-term value. One is the beauty and personal care division and the other one is the home care division. That’s about 60% of our business and secures about £1bn spending a year including R+D.

In fact we’re just opening a very advanced manufacturing centre on the Wirral with about a £60m investment.

Polman said after the failed takeover deal that Kraft Heinz had “fundamentally undervalued” his company. The company said it expected to achieve annual cost savings of €4bn to €6bn and boost profit margins from last year’s 16 per cent to 20 percent by 2020.

Read more: London vs Rotterdam — What the move could mean for employees

Commenting on Unilever’s decision to move its headquarters to Rotterdam, a UK government spokesperson said:

Unilever has today shown its long-term commitment to the UK by choosing to locate its two fastest-growing global business divisions in this country, safeguarding 7,300 jobs and £1bn a year of investment.

As the company itself has made clear, its decision to transfer a small number of jobs to a corporate HQ in the Netherlands is part of a long-term restructuring of the company and is not connected to the UK’s departure from the EU.

The move is a huge blow to the British economy at a time when the government is negotiating to leave the European Union. Unilever is the third largest company listed on the FTSE 100.

It’s thought the company is in talks with the London Stock Exchange about remaining on the exchange.

Unilever is among a number of firms to have planned leaving the UK since its vote to leave the trading bloc in June 2016.

The decision comes as prime minister’s business council is set to hold a meeting in Downing Street with FTSE 100 bosses to discuss Brexit later today.

It’s thought the UK could lose billions in exports as around two-thirds of EU companies (63%) said they planned to move some of their supply chain out of the UK as a result of the decision to leave the single market and customs union, a survey by the Chartered Institute of Procurement & Supply (CIPS) in June 2017 found.

Governments in Britain and the Netherlands have been lobbying Unilever for months, in the hopes of hosting one of the world’s biggest producers of consumer products.