Being in charge of network infrastructure is never easy, particularly in education, but when you oversee a vast, federated network of colleges and departments such as at the University of Cambridge, it’s an immense challenge.

This is what faces Jon Holgate, head of infrastructure at the University of Cambridge, whose job covers “everything that’s operational in IT, from the front of house through desktops and PCs and servers and data centres and backups”.

And it’s not even just your everyday devices that Holgate has to contend with. As a world leader in international research, Cambridge has a wide range of unusual devices on its network, from unorthodox, student-made technology to connected cows.

Verdict caught up with him at EMEA Atmosphere 2019, the yearly event for wireless networking provider Aruba, a Hewlett Packard Enterprise company, to find out how what he has to contend with, how the university handles its wireless needs and how he expects network challenges to develop in the future.

Building a seamless wireless network at the University of Cambridge

To the average user, there isn’t much difference between one wireless network and another. However, the contrast between the wireless solutions being deployed when Holgate first came into the position six years ago and the one in use today demonstrates quite how much of a difference a high-quality wireless network solution can make.

“The university is very federated, so there are lots of departments and colleges, and they all kind of do their own thing. So when I came into the post six years ago, in the absence of a central provision, they’d all deployed their own wireless network,” he says.

“Which was fine, except everyone had their own authentication platform, so if you ever moved between buildings you’d need to get another user account. You could only use wireless in the building you started with, which is kind of ridiculous because most of the staff had a desktop, which was wired in anyway.”

Faced with this less-than-ideal solution, Holgate set about deploying a network that would run across the entire university, where students and staff would automatically connect without needing separate authentications using Aruba technology.

“We worked with Aruba and over the last five or six years we effectively displaced all of those with an Aruba solution.”

This means that students, staff and visitors to the university are connected to a single network, which automatically passes them from node to node without them needing to manually connect as they move across the city.

Of course, while the network infrastructure has improved dramatically over the past few years, so too have the demands on it.

“Not only have we seen – which you would absolutely anticipate – an increase in devices and users and consumption, we’ve seen that wireless is now over 40% of our internet traffic,” explains Holgate.

“[This] is probably less that most companies, but we collaborate with CERN, and big datasets, so we’re used to really big data, and 40% is a very large amount, it’s probably about 40 petabytes of data a year over wireless.”

“When we started the wireless journey six years ago, we went from a hotspot fairly quickly to building saturation, but the one bit of pushback we got five, six years ago was not to deploy wireless in the lecture theatre, because that was a place to focus on the lecture,” he explains.

“Now that has entirely switched. For two, three years now that has been the one thing that is stressed as the most important place to have the wireless.”

He attributes this in part to a growing focus on student satisfaction, as well as the need to keep up with institutions from all corners of the world.

“We are a global brand and a large percentage of our staff and students are not originating from the UK. And this constant influx of expectations globally means we’re not competing with Oxford or Birmingham – although we do, legitimately – but we’re also competing for students with Harvard or Yale or Beijing or wherever else it might be,” he says.

“You’re also getting academics coming from those institutions, and they’re used to having certain tools or experiences and if you can’t deliver them you get this jarring.

“But from my point of view as somebody responsible for delivering, that’s a useful thing. It’s much more useful to have a userbase that is demanding outcomes than one that is passively accepting whatever you give them.”

It’s not just vast amounts of data that Holgate has to contend with. As a university that is world-renowned for research across many avenues of academia, the University of Cambridge also provides a number of network challenges that would be unlikely be faced by any head of network infrastructure at a major corporation.

One of these is eduroam, a global system that enables academics, students and university staff to access networks at any participating institution around the world, including universities, research institutions and even airports.

“We get somewhere in the region of 30,000 academic visitors to the university each month. So that’s people that are turning up with eduroam,” he says.

“Eduroam is a system that is adopted by about 3,500 research institutions and universities globally, and everyone uses radius authentication. So effectively I authenticate against mine, and if I go to any other university like Oxford, it identifies me as Cambridge and roots back my authentication back to Cambridge and then accepts me onboard, so I can walk into any of these 3,500 universities and it automatically logs me onto the network.”

Then there’s the changing access to IT knowledge, which has translated into a far greater range of devices and needs being placed on the network.

“Students turn up with every home device you could possibly imagine and expect it to automatically work. I think that’s one of the changes in the last ten years that’s really started to bite now,” he says.

“I think Apple probably [made] the first consumer product that everybody could own and understand how to work. And it demystified a lot of IT, whereas IT departments used to be the holders of all the secret information about how to do stuff, now a C-suite of staff could then deploy their own apps and use it, and it’s all instant. And I think that has instantly raised the bar.”

On the weirder end of the spectrum, the university’s own research projects can see some very unusual devices being added to the network.

“We have wireless cows at the university. So that’s a research project at the university farm where cows have wireless devices and it gets recorded when they self-milk. Effectively they turn up at the milking stall, the thing uses lasers and something else I don’t understand, milks them and then we record all this data. So we’ve already seen some odd stuff on the network.” 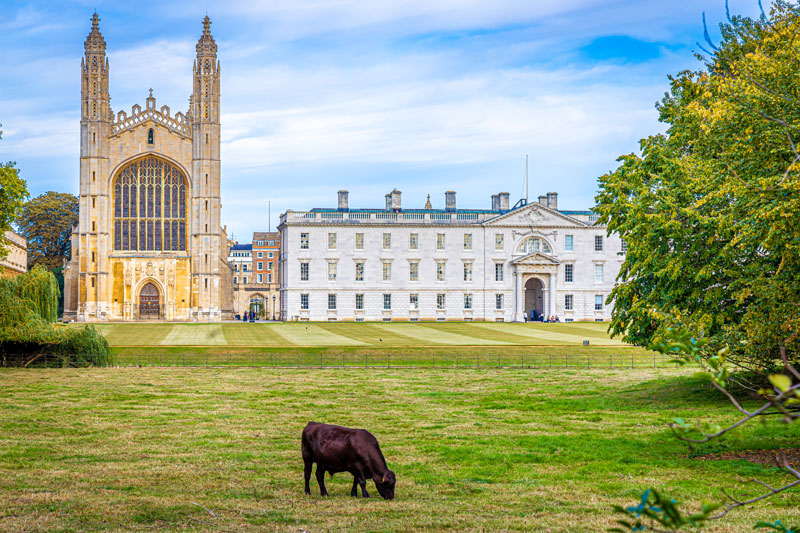 Beyond connectivity: Network benefits in academia

While the benefits of keeping staff and students connected are clear, there are also considerable less obvious benefits that can be provided by Wi-Fi.

“We’re fortunate that the university has seen wireless as important for a number of years, which is why we’re doing this, but I don’t think it realised until a couple of years ago that this is a strategic facility, so it gives you a lot of data,” says Holgate.

This means that wireless can – and has – provided invaluable insights for the university.

“For instance the university does have this very aggressive building strategy, it’s building a lot of buildings, but you can’t endlessly build your way out of requiring more space. And it doesn’t tell you anything about how to make existing buildings multifunctional, so you’ve got a building for history or a building for physics, and you have to be in that building to access the history stuff or the physics stuff,” he says.

“Well of course on the wireless you can start enabling that to be, rather than geographically based, user-centric, so you turn up and you still access your resources wherever you sit, which means buildings all of a sudden become multi-functional.

“It also tells you capacity planning, so there has been a lot of work about building additional lecture theatres and anecdotal discussions about what the size of these might be. Well the wireless statistics give some pretty clear answers as to how many people are in the room, and how that tapers over time.”

“Once you start looking at that data – and it’s generally anonymised, this data – you start seeing that some students don’t repeatedly turn up, and that might be something that the university wants to take proactive engagement on for student welfare.”

The potential of data for the university has, however, only been partially realised, and Holgate expects to see this become increasingly explored over the next few years.

“The networks hold an awful lot of data and can tell us a slightly more objective version of the truth than any of us may personally hold. I think exposing that back to the organisations is going to become increasingly important as we start moving towards outcome-based decision making; data-driven decision making,” he says.

“I think that’s really interesting, and I think for an organisation like that will be quite revolutionary; when we can start turning what’s quite complex datasets into something that’s instantly consumable and usually that means visual.”

The future of education networks: Towards the IoT

Looking to the future, Holgate anticipates far more growth to come, particularly over the next decade.

Were there is particular room for expansion, however, is in the internet of things (IoT).

“I think we’re definitely going to see an increase in IoT, and we do to an extent anyway: we have building management systems and CCTV, but it’s all fairly ad-hoc rather than strategic, and I think we’re going to see that become automated as a process in a way that it’s not at the moment,” he says.

“The workplace is trying to keep up with the home development. I have smart lighting at home, a smart camera, smart thermostat. That’s much more sophisticated than my office space. So we’ve seen this trade-over. I would expect that to level out in the next five years. I would hope so: I would hope buildings will become much smarter.”

This will mean far more sensors being deployed within the University of Cambridge’s network, something that is already beginning to happen. However, as with the deployment of Wi-Fi, there needs to acceptance from all stakeholders about the benefits of the technology.

“You’ve got two sides to that: you’ve got the running the organisation side, and that is certainly something we’re going through the investigation process at the moment for, and you’ve also got the academic research. We already run some IoT networks, Allora network, Sigfox network and all those kind of things specifically for academics to try different sensors,” he explains.

“But with the best will in the world, the people that tend to be in charge of very large facility estates or architects on very large developments tend to be quite elderly males, who probably grew up in an era – started work in the 70s or 80s and it’s not – I’m sure they’re very reliable putting sewerage in, and electricity in and water in, that kind of stuff. But that’s the industry they’ve grown up with. And maybe there’s a generational thing that we have to move through first.”