In the early 2000s, unicorns (privately held start-ups worth over $1 billion) first emerged in the US. The country continues to dominate the unicorn club. According to GlobalData, there are 751 tech unicorns as of 31 August 2021, of which 379 are headquartered in the US and collectively achieved a valuation of $1.3 trillion.

California hosts most of the tech unicorns

California has emerged as the birthland of tech unicorns, as it hosts over half of those in the US as a whole. It is home to 205 of 379 tech unicorns in the country, including 11 of the top 15 American tech unicorns by valuation at their last funding round.

New York has the second largest number of tech unicorns with 64 of them including Better.com, Ro, Dataiku, and Chainalysis followed by 17 in Massachusetts. 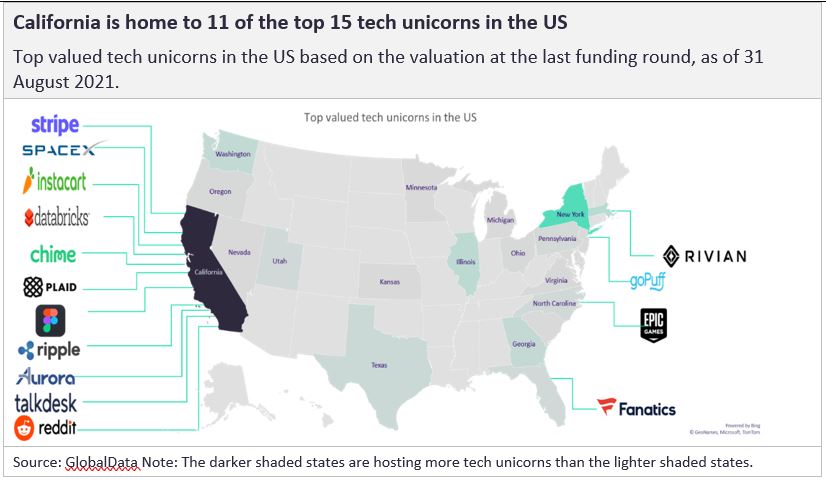 The US is home to most of the cloud unicorns

The US is home to more unicorns operating within the cloud, fintech, healthtech, big data, and cybersecurity themes as compared to other regions. 81 of the cloud unicorns are headquartered in the US and collectively worth $204 billion. The US hosts 53 fintech unicorns and the combined valuation from the US stands at $249 billion.

Tiger Global Management, Andreessen Horowitz, Sequoia Capital, Accel, and Softbank are the most active investors in the American tech unicorns.

The US will continue to dominate as it expects more start-ups to achieve unicorn status this year and we also expect at least 35 unicorns from the US to exit the unicorn club into the public markets in the next two years. The biggest companies that are anticipated to list on the public market are Stripe, Instacart, Databricks, Chime, and Ripple.