The surge followed the announcement of a £1.6 billion takeover bid of the retail bank from fellow lender Clydesdale Bank and Yorkshire Bank (CYBG) on Monday.

The proposal between two of the UK’s leading challenger lenders would create the country’s largest challenger bank with more than six million customers.

Virgin Money, whose largest shareholder is billionaire Richard Branson’s Virgin Group, said in a statement on Monday that it had “received a preliminary and conditional proposal from CYBG to acquire the entire issued and to be issued share capital of Virgin Money”.

CYBG said that under the all-share takeover deal, Virgin Money was offered 1.13 CYBG shares for each Virgin Money share, representing a 15% premium at Friday’s close and valuing the bank at just over £1.6 billion.

Virgin Money would own about 36.5% of the combined company.

Virgin Money said it is still in the process of considering the proposal:

“The board of Virgin Money is in the process of reviewing this proposal.

“There can be no certainty either that an offer will be made nor as to the terms of any offer, if made.

“Accordingly, shareholders are advised to take no action in relation to this proposal.”

CYBG said that the combined company, which Virgin Money would own around a 36.5% stake in, would create “substantial synergy potential” as the UK’s leading challenger bank.

“The combination would provide a powerful full-service banking offer, including leading digital and mobile banking services, for six million personal and business customers, bringing together the complementary strengths of CYBG and Virgin Money.

“With this further strengthened customer franchise and national reach, CYBG believes the combination would deliver increased value for shareholders and wider benefits to other stakeholders.”

The Glasgow-based bank added that it “recognises the strength and appeal of the Virgin Money brand,” which would “play a significant role in the combined group”.

Sources cited by the FT said that informal discussions on the deal had been ongoing for weeks.

CYBG warned there “can be no certainty that a formal offer will be made”, adding that it had until 5pm on 4 June to commit to an offer, or walk away from a deal for at least six months. 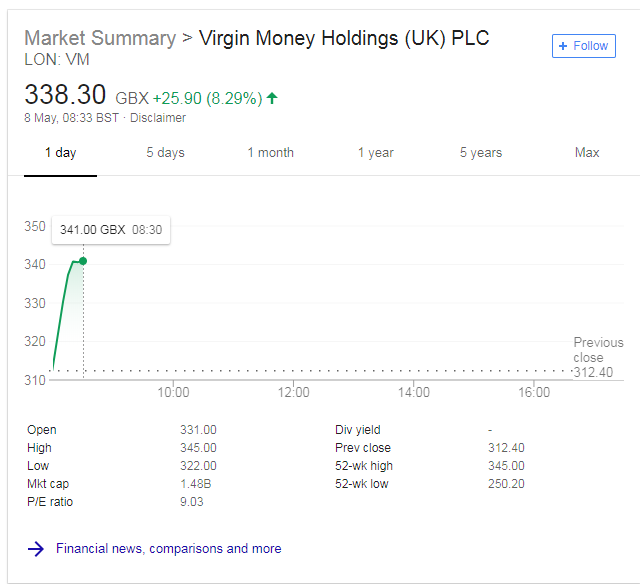