Shares in VW Group shot after it said it had sold a record 2.7 million cars in the first three months of 2018, calling it “a good start to the fiscal year”. 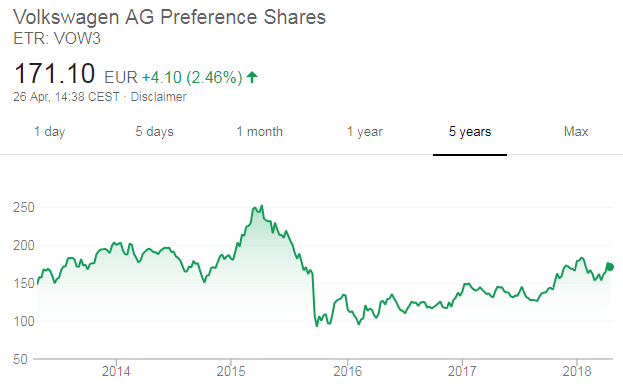 Revenue at Volkswagen (which includes 12 car brands such as Porsche and BMW) also grew 3.6% to €58.2 billion.

Volkswagen Group said the “robust economic growth” was thanks to efforts to transform itself into a leader in the electric and automated vehicle market.

The Volkswagen Group is in a robust economic position, our ‘TOGETHER – Strategy 2025’ is taking effect.

Following an extremely successful initial phase, it is now a matter of pursuing this course in a strong and focused manner. After all, the speed of change in our industry is still increasing.

Our goal is to transform the Volkswagen Group into one of the industry’s leading companies in terms of profitability, innovative power and sustainability. The quarterly results confirm that we are on the right path.

The group blamed the profit slips on a change in the accounting rules used in the valuation of derivatives.