The shortage of personal protective equipment (PPE) for front-line medical workers continues to be one of the biggest issues in the ongoing coronavirus crisis, prompting solutions to come from unusual places, including Whitgift School.

Currently closed to most pupils and conducting a remote learning programme, Whitgift is an independent school in South Croydon, London, with impressive facilities. But in the case of its Design, Technology and Engineering department, those facilities are now being put to an entirely different use: the manufacture of medical visors.

The project is the work of Thomas Wendes, design, technology and engineering teacher at Whitgift, who embarked on developing a PPE-standard visor after a request from a parent.

“The Design, Technology and Engineering department was contacted by a parent who works for the NHS explaining they had seen that some 3D printed open-source PPE being developed online and wondered whether we could use our facilities to produce some,” Wendes tells Verdict.

“I was really keen to help with this and immediately began to look into the options open to us. We are lucky to have some excellent equipment at Whitgift and it felt like a really humbling thing to be able to help the staff who are in frontline roles in some way.”

The visors Whitgift is manufacturing are predominantly being supplied to Croydon University Hospital, where they have been approved by their procurement department as PPE.

“The main challenges were developing a visor that could be sterilised, reused and efficiently manufactured using school-based materials and manufacturing techniques,” says Wendes.

“The visor itself has not been medically tested to prove it is to standard. However, during the current crisis there has been such a rise in the use of this type of PPE that the hospital was getting through much greater numbers of equipment so appreciated anything that created some form of barrier and additional protection.”

Initially, Wendes produced two prototype versions, one made using the school’s 3D printing facilities, and the other using its laser cutting machines. Both are being used as PPE.

“The Director of Partnership and Community at Whitgift, Mr Andy Marlow, contacted Croydon University Hospital explaining how we were producing PPE for other healthcare workers and to see if they would be interested in visors,” said Wendes.

“After handing over a 3D printed visor and the in house laser cut version to the procurement officer, we waited for a verdict. A group of clinicians decided they wanted as many of our laser cut version of the visor as we could produce.”

Visors manufactured at Whitgift using both 3D printing and laser cutting methods are now being used by healthcare workers to treat patients in a variety of settings, as the coronavirus rapidly depletes existing stock, with more on the way.

“We have been told that they are currently being used in the Hospital maternity ward as the current stock is being prioritised for use on Covid-19 wards,” explains Wendes.

“We have also had many requests from other local healthcare organisations. Currently each of the 54 GP practices in Croydon have been given a single visor for their minor operations rooms. We sent 20 visors to Moorfields Hospital to allow them to continue with emergency surgeries there.

“The school has been contacted by a multitude of care homes, a psychiatric hospital and a parent who works in Kingston Hospital’s ITU has spoken to us to ask for a slightly enhanced visor to be used in to be used by nurses and doctors medically aiding Covid-19 confirmed patients. That is currently at prototype stage. It is great to see schools across the country using skills to support the NHS staff.” 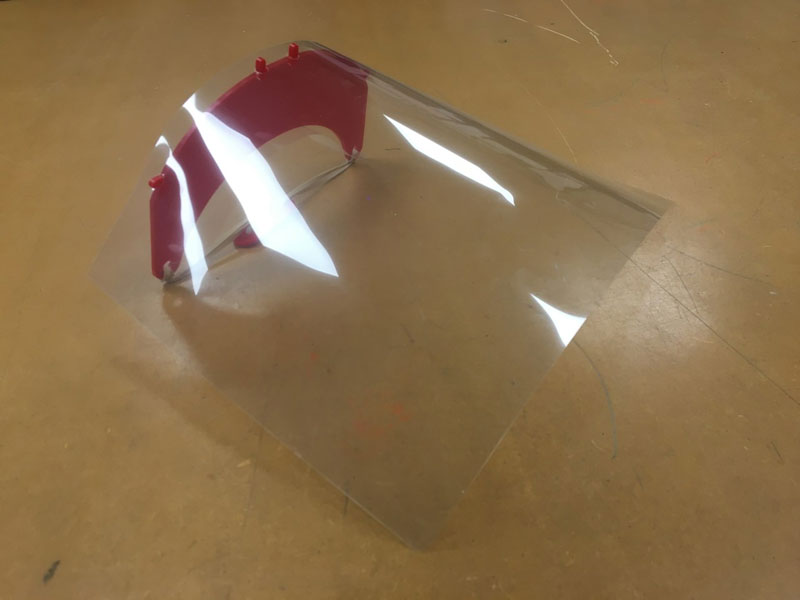 3D printing vs laser cutting: How Whitgift is manufacturing visors

Whitgift is currently producing visors at a rate of around 300 per day, which is achieved by its use of both 3D printing as laser cutting.

Its 3D printing work uses an open-source file developed by PRUSA, which can be downloaded here, and prints stacks of visor headbands. It is being used by a growing community of people using their own 3D printers to produce visors for local hospitals and healthcare organisations.

However, Wendes describes it as the “least preferable” method out of the two due to the time it takes to manufacture.

“As a visor it functions well, however FDM printers take a very long time to construct a single visor. On our 3D printers a stack of 4 visors can be produced in 8 and a half hours. With 4 operational 3D printers, that is an output of 16 visors a day which falls far below the current demand,” he says.

“My preferred visor is one I have designed that is manufactured on the laser cutter. This visor is produced out of a piece of 3mm acrylic and I can produce 21 headbands in 23 minutes.”

The laser cut visor was initially developed to best use the resources on hand at Whitgift, and Wendes plans to make laser cutting files available for others to use soon. The school is also looking to replenish stocks of the raw materials so that it can keep up with demand and is seeking support from manufacturers to see if they can donate or provide materials at cost.

“The visor is made out of three components. The laser cut headband that uses 3mm acrylic sheet, 2 x 125mm elastic bands, and a PET visor made out of a gloss laminator pouch that has been passed through the laminator machine with no article inside,” he says.

“At a current total of 650 constructed visors we have had to purchase more laminator pouches and rubber bands. We are also in conversation with our plastic suppliers to replenish the acrylic stocks so that we can maintain at least our current output levels.” 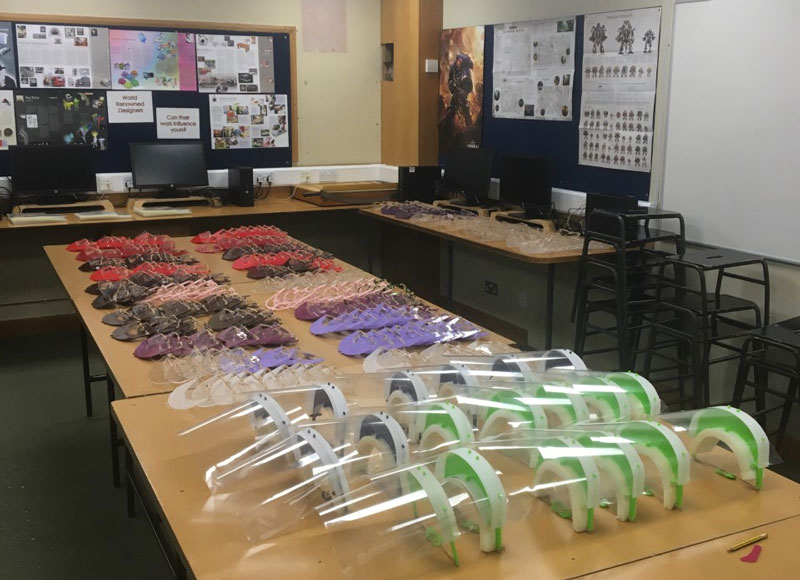 While the project has been developed without the involvement of students thus far due to the closure of schools by the UK government, Wendes does see the project providing future educational benefits.

“The speed at which this process happened meant that I moved forward with this myself, and whilst it would have been great to involve them in the production, they are all required to be off site so that was not possible,” he says.

“I have been using a small team of two staff volunteers and we have produced a socially distanced production line to maintain a safe but effective working environment.

“In future DTE lessons the product itself can be used as a very good example of Iterative and User Centred Design, which are embedded in the GCSE and A level curriculum.”