At its zenith the BBC’s Top Gear was listed in the Guinness Book of World Records as the most-widely viewed factual television programme in the world.

That was back in 2012, and since then Top Gear has been marred by various controversies, lost four different presenters and an executive producer, gained a new principle trio and two new contributors.

Still, the show keeps lumbering on, returning to BBC One in the UK this weekend for its 25th series. As with the 24th series, the principle presenters will be Matt LeBlanc, Chris Harris and Rory Reid, according to the BBC.

As ever, audiences are promised the classic Top Gear format. The focus is still primarily on the cars, but there will be plenty of other shenanigans too. Already revealed are a hunt for Bigfoot in Northern California, an attempt to transport a basket of eggs, and even a flying car.

But how much has Top Gear actually changed over the years?

Top Gear actually existed long before its recognisable modern format. The series began life in 1977 as a half-hour motoring magazine programme, broadcast only in the UK’s Midlands region. The show was also broadcast once per month, rather than in a weekly serialised format.

What separated old-Top Gear from its modern counterpart was that the original series had a much larger focus on news and serious issues. Segments covered new car tests, speed cameras, insurance, and buying second hand cars.

By 1978, it transferred from BBC Midlands to be broadcast nationwide. The show cycled through a list of 38 different presenters between 1977 and 2001. Most noteworthy among these were Noel Edmonds, Kate Humble, and Angela Rippon.

However, it was in 1988 that Top Gear started to attract serious attention. That was due to one new presenter in particular who joined the show from Performance Car Magazine: Jeremy Clarkson. 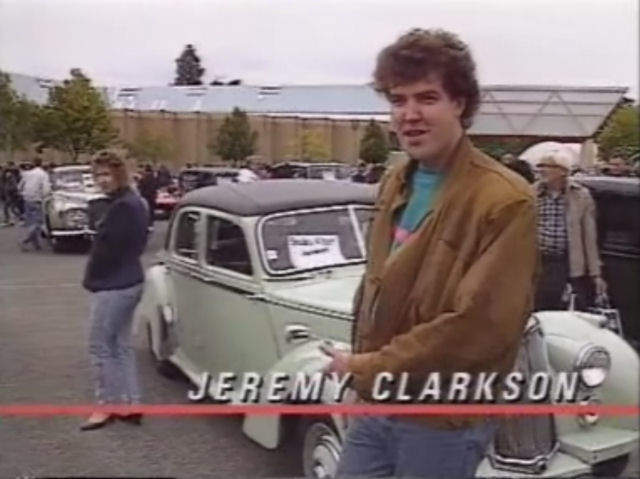 From 1988, it was regularly drawing in audiences of 5m upwards.

In 1999 Clarkson left the show to pursue other projects. At the time Clarkson explained to The Sun that he felt he had reached the end of the road with the show and couldn’t take the format any further. As a result, audience numbers dropped off a cliff, according to the BBC.

By 2001, the BBC decided to cancel the show after viewing figures kept falling.

As a result of this decision, the entire hosting team and production crew left the BBC. They went to a rival broadcaster, Five, creating a new motoring show: Fifth Gear.

However, on the eve of Fifth Gear‘s first airing, the BBC announced Top Gear would be returning with Jeremy Clarkson as principle presenter and fellow former presenter Andy Willman as executive producer.

Dispensing with the magazine format of the original series, the modern Top Gear went with a studio format, inviting live audiences to watch the show, and conducting some car reviews in the studio. The show also gained a permanent home at the Dunsfold Aerodrome in Surrey to conduct track tests.

Another wrinkle in the classic formula was challenges. These saw the presenters involved in car-based trials, having to rebuild cars, race each other, and take part in various tasks. These challenges proved so popular that from the ninth series of the new format, feature length challenge specials became part of the show’s formula. These were often released as a Christmas special.

The show’s three original presenters were Jeremy Clarkson, Richard Hammond and Jason Dawe. For the second series, Jason May replaced Dawe. May had previously been the presenter of Top Gear‘s original format in its twilight years.

The show also gained an anonymous racing driver, the Stig, who tested high performance cars on the track.

The new format of Top Gear was a ratings hit. In it’s first series, the show drew an average 3.4m viewers per episode according to BARB ratings, but by the time Clarkson, Hammond, and May left the show, it was drawing an average audience of 6.49m per episode. The series’ ratings peaked in 2007 when the first episode of series 9 drew in an audience of 8.13m viewers due to showing footage of a car crash that had nearly resulted in the death of Richard Hammond.

The end of the Clarkson, Hammond, and May era

The BBC, for the most part, stood by Top Gear and its presenters. Unfortunately, by 2015 this bubbling controversy boiled over into outright furore.

Clarkson was already on his ‘final warning’, according to the Daily Mail after using a racial slur against a native while filming a special in Burma.

The series also attracted further controversy after causing a riot in Argentina. This was due to the registration plate on a car which Clarkson drove which was deemed culturally offensive.

The final nail in the show’s coffin was Jeremy Clarkson’s involvement in a ‘fracas’ with one of Top Gear’s producers. It later emerged that Clarkson had physically assaulted producer Oisin Tymon. This was after he was told that Yorkshire hotel where the production was staying could not provide hot food.

Clarkson was immediately suspended pending the results of an investigation into the incident. Eventually, the BBC’s Director General confirmed Clarkson’s contract had not been renewed. Within days, Hammond, May, and executive producer Andy Willman all announced they’d be leaving the BBC with Clarkson.

The group went on to create The Grand Tour for Amazon’s Prime service. Their new programme has almost exactly the same format as Top Gear despite a significantly higher budget, reported by Forbes to be up to $4.9m per episode.

The regeneration of modern Top Gear

Despite losing the show’s stars and their executive producer, the BBC still held the rights to Top Gear.

Soldiering on, it had to ask ‘who presents Top Gear now?’

The BBC eventually cast motoring fan and BBC presenter Chris Evans as the star of an all-new line-up. He was to helm a brand new version of Top Gear. After weeks of speculation, the BBC confirmed that Evans would be joined as host by Friends star Matt LeBlanc. A week later, another set of four further presenters joined the line-up.

Aside from the change in hosts, Top Gear remained essentially the same. The only other significant differences were that the celebrity driving section became a rallycross competition, rather than a straight-up time trial, and the Top Gear studios had some minor cosmetic differences.

Unfortunately, response to the newly reborn Top Gear were not positive. After beginning the series with an audience of 6.42m viewers on BBC Two (according to BARB), it ended with a pitiful 2.64m.

Evans swiftly announced his departure from the show.

For the 2017 series, the BBC shuffled the line-up of presenters once again. Rory Reid and Chris Harris both moved into the spotlight as main presenters alongside Matt LeBlanc. Sabine Schmitz and Eddie Jordan presented various smaller segments.

The new series also presented a revamped studio, and a new logo and opening titles.

The redone hosting line-up received favourable reviews. Still, the Guardian did criticise the lack of chemistry between the hosts.

“The c-word was one that was thrown at us a lot in the first season.

“But it was just fanciful to think that you can just create a chemistry overnight. You don’t, do you?

“You have to learn where people’s funnybone is before you can start to poke fun and work out where that joy lies.”

Still, there is a long way to go for Top Gear to regain its lost viewers. The last series ended with just 2.69m viewers, up from a series low of 2.40m viewers in the previous episode. That’s considerably less than half the viewers of the lowest rated episode in Clarkson, Hammond, and May’s final series.