This growth will be supported by continuous rise in smartphone subscriptions, projected rise in M2M/IoT subscriptions as well as rising multi-SIM ownership. Moreover, mobile subscription penetration of the population in Uruguay will grow further to reach 186.0% by 2025.

The service has focused on FWA and later in 2020 in IoT solutions. For this launch, Antel has adopted a non-standalone (NSA) technology approach that allows operators to leverage existing LTE infrastructure for the roll out of 5G services. 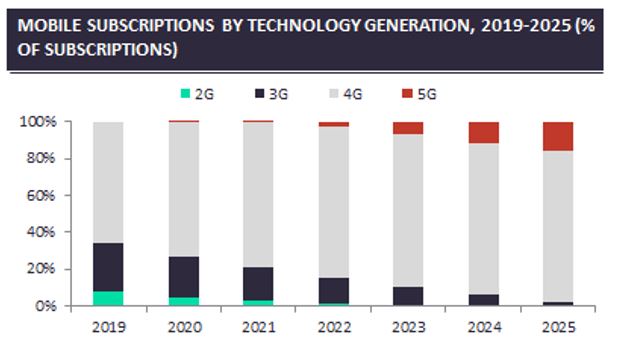 To support 5G development in the country, URSEC, the Uruguayan regulator, will allow telcos to conduct 5G Standalone trials (SA) on temporarily assigned spectrum in the 26GHz band. Also, in addition to the 26GHz band, the regulator is scheming the use of the 3.5GHz-3.6GHz range for 5G services. We expect 5G to constitute 16.2% share of the total mobile subscription by the end of 2025.