At a recent unveiling, AT&T and Samsung, co-developers of the 5G Innovation Zone, were keen to show how high-speed 5G technology can benefit not just consumers but the manufacturing process for businesses.

Innovation Zone was first announced last October as a co-developed project between AT&T Business and Samsung Electronics America to serve as a real-world testbed for 5G technology in support of plain old manufacturing processes.

The two companies hope the Innovation Zone, located in Samsung Austin Semiconductor, will help their customers and partners see the immediate value of 5G as a core networking technology upon which they can build their business.

Despite the obvious benefits in performance, 5G has yet to become standard as a true replacement for 4G standards such as LTE.

According to GlobalData research, that level of adoption won’t occur until nearly 2023 (see figure 1). So far, early rollouts from telecom operators like AT&T, Verizon and T-Mobile have been very selective in both purpose and scale. It seems we’ll have to wait before we can rely on pure 5G alone to stream Netflix videos while on the morning commute.

But that doesn’t mean 5G can’t make a significant impact right now within select enterprise use cases like industrial IoT (IIoT) for manufacturing, where GlobalData predicts a steady and significant increase in the number of connected, particularly in support of industrial monitoring and metering (see figure 2). 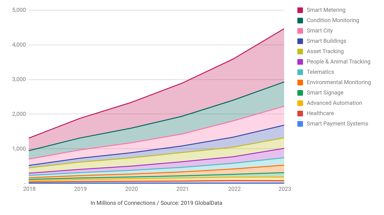 Below are a few select 5G cases on display at the Samsung facility.

Manufacturers can stream millimeter-wave thermal analysis of both machines and chips in motion, looking for potentially costly abnormalities. AT&T and Samsung say this technology can be used to monitor engineers on the floor for safety and compliance. Are they overheated, wearing the proper safety gear, or who they say they are?

Plying virtual and augmented reality goggles, the two firms showed how a maintenance worker could navigate a tricky repair process with an augmented overlay displaying process checklists, circuit board diagrams and real-time video instructions. Aside from the usual value in providing an overlay of real-time, data-driven knowledge, a key value implied in this is the potential for knowledge transfer among engineers – something immensely practical when considering that many line engineers must rotate out every 15 minutes in some environments.

5G can facilitate high volume, low latency measurement and sensor control. Though this is a very traditional goal, it is very important to manufacturers, as many can only apply 5G instruments on their machines and payloads intermittently. Therefore, the ability to suddenly afford to instrument “everything” is truly transformational. Predictive maintenance AI models, for example, can run at a much, much higher rate of success with defective payloads and potentially defective machines more consistently and readily detected and identified respectively.

The first beneficiary of the new Innovation Zone will certainly be Samsung itself. The Austin-based fabrication (and recently certified foundry) facility is looking forward to these potential 5G benefits. Instrumentation insights, for example, is of particular interest to the company, as at present it builds its predictive models instrumenting only a percentage of its machines and payloads.

Given that a fabricated semiconductor can spend up to 60 days traversing Samsung’s sizable facility, any single unit itself could hold the key to revenue lost or saved.

Full instrumentation is, therefore, the goal, but to date, the mostly wired- and WiFi-based instrumentation network at Samsung Austin Semiconductor falls short thanks to WiFi dead zones and the prohibitively high cost of wiring up every single machine and payload. With 5G at the ready, Samsung intends to overcome those limitations and usher in a new era of not just optimization but also potential innovation.