Air France-KLM must clarify its market position as the lack of a clear strategy is the source of its financial problems.

Strikes over higher wage increases in Air France have already cost the airline about €350 million.

However, problems at the company go deeper than a labour dispute. The lack of a clear strategy is a structural problem, impacting competitiveness and causing poor profitability. 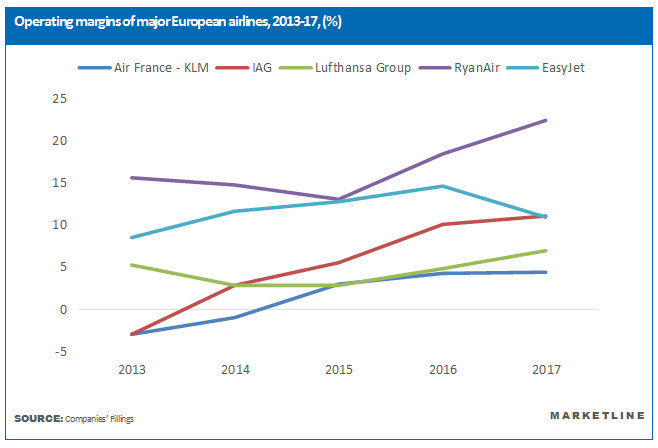 The shift of Air France and KLM brands to the premium market seems appropriate regarding competition and a high cost of staff, which can be leveraged for higher value service.

As competition in the airline industry heats up and oil prices rise, financial difficulties are set to worsen. Subsequently, the company has to make a clear selection between low-cost services and differentiation over premium services.

Air France – KLM has insisted on offering premium onboard services in all cabins in long-haul flights such as three-course meals and in-flight entertainment systems to distinguish itself from other carriers.

The group has also insisted on growing premium brands such as Joon, a medium to long-haul carrier which targets millennials. However, its main rivals have launched low-cost carriers to cater to this demographic.

Air France-KLM has tried to capture all consumers from the pure economy class to premium through a hybrid pricing strategy.

Air France and KLM branded flights have three types of cabin classes -economy, premium economy and business, on the medium to long-haul aircraft.

Accordingly, the airline ends up with an unclear market positioning; its brand may seem too expensive for economy class passengers but it is also undermined as a premium brand for upscale consumers.

An unfavourably disproportional pricing strategy over services compared to other similar air carriers, and inefficient marketing techniques magnify this problem.

Engaging in this hybrid operational model entails higher costs and limited pricing capacity; offering frills and at the same time trying to keep costs down is unsustainable.

In fact, with such a range of price discrimination and large size of fleet, Air France ends up discounting tickets to fill its premium and business cabins. This is manifested by the fact the company has significantly lower operating margins than similar carriers IAG and Lufthansa, even though it has higher load factors.

Air France-KLM makes up 80% of its traffic from long-haul flights.

Engaging in price competition to protect that revenue against long-haul low-cost carriers would be destructive.

Air France – KLM has lost the first-mover advantage in this field, while the launch of a low-cost player would further complicate its current business model. In this regard, targeting the premium market, especially in transatlantic journeys in which there is less competition from premium air carriers, would be beneficial.

Finally, staff plays a crucial role in this decision. The workforce of Air France-KLM is paid a premium to provide a commensurate service.

Accordingly, the disruption of this value-service model towards low-cost service could be devastating for the company and it would not be feasible anyway given strong opposition from labour unions.