It may be no surprise to hear that online retail giant Amazon UK is prospering but the level of its success should worry the entire retail industry.

While its larger competitors have been hopelessly boasting about “record sales” in a period of inflation which would render anything else disastrous, Amazon said it kept quiet about its UK performance.

Amazon UK’s revenue increase of 19 percent to $11.4bn didn’t warrant a mention in Amazon’s 23-page press release, nor in its earnings call discussion with investment analysts.

Instead this sole UK data point was buried away on page 70 of its annual 10-K report filed the next day. 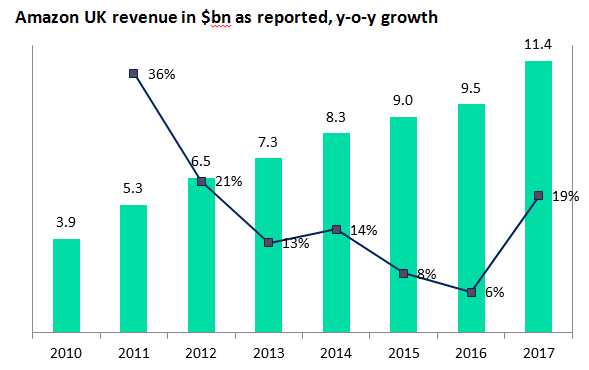 Its coyness about the UK is just a function of its relative size, as it accounts for less than seven percent of its total sales, and the US market grew even faster (though it was helped there by the acquisition of Whole Foods to a greater extent).

But the UK numbers are particularly impressive considering the maturity of the online market here, and when its revenues are converted back to sterling using average daily exchange rates.

Read more: Results season has delivered for the four As: Alphabet, Amazon, Apple, and Alibaba

It reveals that its rate of growth has been accelerating for the third year running, and in 2017 grew at 25 percent to £8.8bn, the fastest rate for six years. 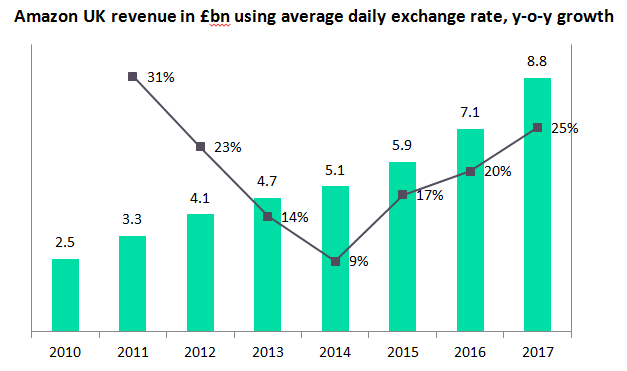 When you then factor in its increasing reliance on third party retailers – from which it only recognises the commission charged – then the growth is even more impressive as it means that the gross transaction value must be growing at an even faster clip.

Amazon UK is not only taking online market share, but driving the online market itself, and stealing increasingly large chunks of sales from physical store-based retailers.

Rather than the threat subsiding as it matures, its latest results indicate that its impact on the market will be greater and faster than suspected.

It’s not all from domestic demand though, as we believe that there has a major increase in overseas orders going through its UK platform since the devaluation of the pound in mid-2016 made its pricing more attractive.

Currently more non-food spend goes through Amazon’s UK platform than through any other retailer.

For now the big four UK grocers (Tesco, Sainsbury’s, Asda, and Morrisons) are still larger overall but if Amazon’s current trajectory continues, it will soon have Tesco in its sights.