BAT bought Reynolds American for £41.8 billion in July last year, the largest acquisition the tobacco industry has ever seen.

BAT — which sells Dunhill and Lucky Strike branded cigarettes — has thrown itself fully into ecigarettes and devices that heat tobacco without burning it.

The global ecigarette market is expected to reach $27.6 billion by 2022.

Ecigarette growth took off in 2014 as new technology was developed, major acquisitions took place and government regulations were introduced.

Tobacco companies are now dedicating significant portions of their budgets to the research and development of ecigarettes.

BAT announced the expected sales growth alongside its full-year results for the 12 months to 31 December.

“Our investments are now coming to fruition and, recognising that not all consumers are the same, we now have an unrivalled range of exciting and innovative products across the potentially reduced-risk categories — including vapour, tobacco heating products, oral tobacco, tobacco-free nicotine pouches and moist snuff.”

“The transformational deal to acquire Roynolads  marked a record year in 2017. The group continued to deliver on its commitment to high single figure constant currency earnings growth, substantially reinforced the long-term sustainability of that growth with the largest acquisition of a tobacco company ever completed and achieved significant success in its next generation products business.”

The battle between BAT and rival tobacco company Philip Morris is heating up.

Philip Morris is regarded as having a lead in the tobacco-heating device market — which heat tobacco without burning it and removing some health risk associated with traditional smoking.

BAT has plans to submit a marketing application to the US Food and Drug Administration for its Glo tobacco-heating product this month, according to Reuters.

It expects to hear back on its application for a different device, with a carbon tip, by mid-year. While it has made progress away from traditional tobacco products in recent years BAT is lagging behind Philip Morris.

BAT ought to be better placed than most to benefit from these shifting sands. However, the industry is clearly changing at an unprecedented rate and it is very difficult at this stage to say how this all plays out in the long term. 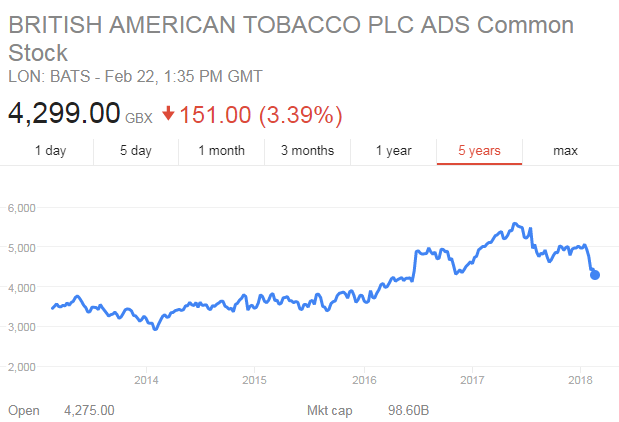 BAT acquired the remaining 57.8% stake in Reynolds American that it did not already own in July 2017 for $58bn, the biggest by a UK multinational company in two decades, and giving it access to the US market.