As Facebook’s co-founder and chief executive Mark Zuckerberg yesterday faced his second day in front of US law makers, the company at the heart of the social media giant’s data sharing scandal got its third CEO in as many weeks.

Cambridge Analytica is thought to have harvested the data of up to 87 million Facebook users without their permission, collected through an app called thisisyourdigitallife, built by the Cambridge University academic Aleksandr Kogan.

The board has announced today that Alexander Tayler has stepped down as acting CEO of Cambridge Analytica and will resume his former position as chief data officer in order to focus on the various technical investigations and inquiries. We would like to thank Dr Tayler for his service in what has been a challenging time for the company.

Julian Wheatland, chairman of Cambridge Analytica’s British affiliate SCL Group, will take over from Taylor, it was reported by the Wall Street Journal.

Wheatland has been with the company for nine years, according to his LinkedIn profile.

Meanwhile, Facebook’s Zuckerberg was given a rougher ride on his second day of congressional testimony yesterday.

The 33-year-old CEO faced questions about the tech giant’s ability to track its users’ movements, shopping habits and browsing histories.

What we found now is that there’s a whole programme associated with Cambridge University where … there were a number of other researchers building similar apps. We do need to understand whether there is something bad going on at Cambridge University overall that will require a stronger action from us.

The university has reacted by saying it would be “surprised” if Zuckerberg was only now aware of the work.

Our researchers have been publishing such research since 2013 in major peer-reviewed scientific journals, and these studies have been reported widely in international media. These have included one study in 2015 led by Dr Aleksandr Spectre (Kogan) and co-authored by two Facebook employees. We have found no evidence that University researchers are improperly gathering personal data.

Zuckerberg also surprised many when he said that his data was among that harvested by the consultancy.

Shares in Facebook have climbed since the beginning of Zuckerberg’s testimony to US law makers, with investors signalling their approval of the CEO’s comments. 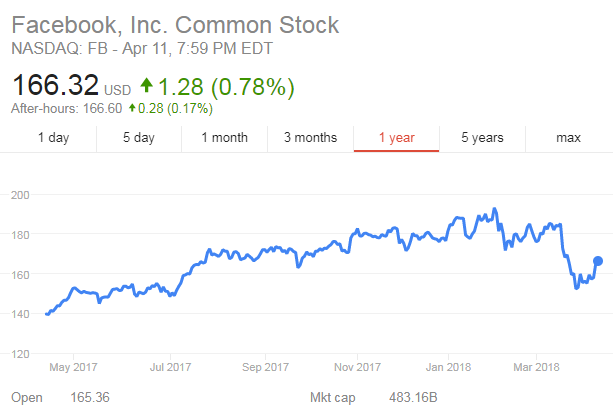