It’s the 25 of January, which means tonight is Burns Night.

The yearly celebration is held on the birthday of famous Scottish poet, Robert Burns. The event traces its roots all the way back to 1801 when, five years after his death, Burns’ friends met to celebrate his life’s work. The event eventually gained widespread attention and became celebrated worldwide.

Burns Night has become a celebration of Scottish culture. The evening is usually celebrated with a Burns supper, where participants drink scotch whisky, read Burns’ poetry, eat haggis, and occasionally play bagpipes. The is a specific order to events at a formal Burns supper which cannot be deviated from. Usually these evenings end in dancing.

How to celebrate Robert Burns night

A traditional Burns supper is celebrated with a standard order. This is as following:

Piping in the guests

As at most informal events, guests enter and mingle. At more formal Burns suppers, a piper will play while the guests mingle. However, at modern Burns night events, the piper is sometimes replaced with traditional Scottish music.

A welcome from the host

Then host of the event welcomes his or her guests as they take their seats with a short speech. Once guests are seated, Burns’ famous Selkirk Grace is read. This is a traditional Scottish thanksgiving grace in the Scots language. It was famously delivered by Robert Burns during a dinner at the Earl Of Selkirk’s home, hence its name.

Like many formal meals, dining begins with a soup course. This is usually a classic Scottish soup such as cock-a-leekie soup, Scotch broth or potato soup.

The piping of the haggis

The main feature of any formal Burns’ night is the piping of the haggis. Lights are dimmed and a bagpipe player performs while the haggis is brought to the host’s table. The tune performed is usually one of Robert Burns’ compositions.

Once the haggis arrives at the host’s table, he or she will perform the Address To A Haggis. This is a performative poem celebrating haggis, with prompts instructing the host when to draw and sharpen their knife, and when to slice the haggis.

The haggis must be sliced from end to end in a proper ceremony.

Guests then drink a toast of Scotch whisky to the haggis.

Guests are then seated and the haggis is served. Usually side dishes include mashed potatoes and swedes. This is sometimes followed by dessert and cheese courses, usually they too are made to a traditional Scottish recipe. The whole meal is washed down with another glass of Scotch whisky.

After the meal, a selection of toasts are given. Like the meal itself, these follow a specific order which must be observed.

In terms of celebration of Robert Burns at the Burns supper, this is the main focus. The host will usually stand and reflect on Burns’ life or one specific area of interest in regards to Burns.

The speech can be either humorous or serious. It ends with a toast to the immortal memory of Robert Burns. 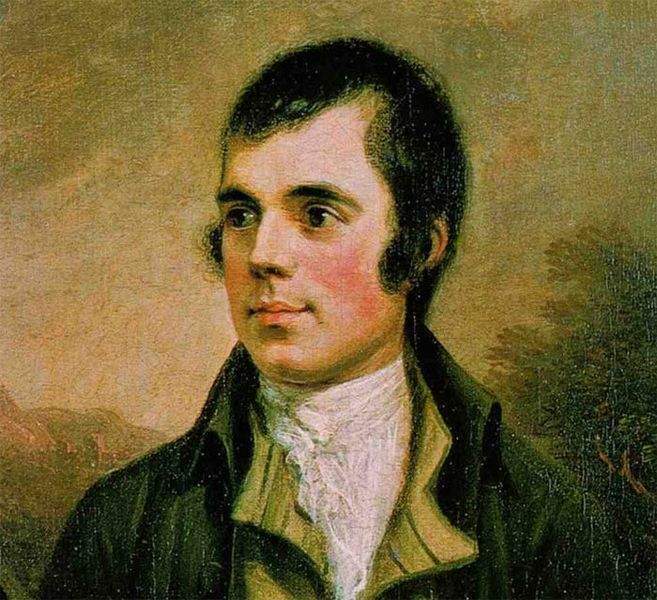 Address to the lassies

Originally featured as a toast of thanks to the women who prepared the meal, this address has become much more involved in recent years. These days the male speaker will address all the women in the room, and covers the speakers’ views on women.

It can be humorous but is never designed to be offensive. At the end of the speech, all the assembled men drink a toast to the women’s health.

Reply to the laddies

One of the reasons the male speaker dare not be too offensive is that his speech gets a response from the women in the room. The elected female speaker will share her views on men and reply to any comments made by the previous male speaker.

Usually, the speakers working on the laddies and lassies speeches will collaborate so their speeches complement one another.

The penultimate part of the evening, and perhaps the longest, is a series of readings of Burns’ poetry or the singing of his songs. There may also be songs and poems influenced by Burns’ work.

This could be done by guests or invited experts. One element of the evening occasionally seen is the invitation for foreign guests to sing songs or perform poetry from their respective homelands.

Finally, the host will call upon one of the guests to give a vote of thanks. Once this is done, guests will stand, hold hands, and sing Auld Lang Syne to bring an end to the evening.

Where to celebrate Burns Night 2018 around the world

Of course, there’s plenty of Burns Night events taking place in Scotland, home of Robert Burns himself. One of the most exciting though is the Òran Mór Burns Supper. Hosted in one of Glasgow’s most interesting locations, a stunning converted church. Helpfully, the event will take place on Saturday 27th January. The full run-down sounds quite something:

“A traditional three course Scottish Menu shall then be served in the stunning Auditorium where the evening’s entertainment shall include performances by Dave Anderson and friends.

“Iain Robertson will deliver his unique Tam O’ Shanter, Dave Anderson will Address the Haggis and Julie Duncanson performs Kate O’ Shanters Tale.  Then there will be singing from Ryan Burns and Sara Clark-Downie and dancing into the wee small hours with music from Scots Reggae band King Snowflake!

“Tickets are priced £42.50 and include a welcome dram of whisky, three course dinner and entertainment.”

On Friday 26th and Saturday 27th January, the Scottish café and restaurant in the Scottish National Gallery will host a three course Burns supper with a traditional Ceilidh. Guests can find out more and book here.

The Dresden Anglo-German Association hold a yearly Burns supper. This year, the event costs €44.90 and includes a three course meal, two glasses of Scotch whisky, and one non-alcoholic beverage. There will also be a traditional bagpiper playing at the event. Tickets can be purchased here.

Unfortunately, this event is not going to be celebrated on actual Burns night, 25th January. However, instead it will occur on the much more handy date of Saturday 27th January. Starting at 18.30pm, the event will take place at The Pennisula Hotel.

Tickets cost RBM 1000 or RBM 9000 for a table of ten. The black-tie event will see guests treated to a four-course meal, free-flowing whisky, wine, beer and soft drinks, and dancing to a live ceilidh band who have flown in from Scotland. Those wishing to purchase tickets must email email beijingcaledoniansociety@gmail.com.

Once again, this event is not being held on Burns Night itself. Instead, the Cape Town Burns Supper Club will be celebrating on 10th February. The cost of the event is R675 per person.

The event boasts ‘Scottish entertainment including the Drums & Pipes of the Cape Highlanders pipe band, fantastic local and international guests speakers, Scottish gin cocktail welcome reception, an exquisite 3 course meal, addressing of the haggis, a few drams and lots of spirited Scottish fun.’ Tickets can be booked by contacting Claire by emailing or calling: info@burnsnight.co.za / 0768353509.

If you’re living in the UK and want to celebrate Burns Night, you really should try to visit Scotland itself. Alas, that isn’t always possible. Still, for a slightly unusual take on Burns Night, this event from Glenfiddich, the famous Scotch whisky company is hosting an ‘experimental’ take on Burns Night.

Tickets cost £50 and include: a bespoke cocktail reception, ‘Snacks’ and a three course experimental Burns influenced supper, cocktail and wine pairings for each course, and unconventional entertainment during dinner. Tickets can be purchased here.

British-themed pub/hotel The Fox And Hounds in Queensland host an annual Burns Night supper. For $49 per person, guests can enjoy a three course traditional Scottish dinner. Diners can book by reaching out to contactus@foxandhounds.net.au.

Many events have closed bookings or held events last weekend so these are just a small selection. Still, it’s worth checking out any local events happening near you. Or why not follow our guide to Burns Night by hosting an event of your own?