With the number of confirmed infected cases rapidly rising, the Chilean government has launched a series of measures to protect the population and cushion the economic impact of the COVID-19 pandemic.

Chilean president, Sebastián Piñera, has declared the state of catastrophe in the country. This is in order to control the expansion of the virus and ensure access to food supplies and basic services for the whole population. The move, which gives the Chilean government extraordinary powers to restrict freedom of movement for a 90-day period, adds on previous confinement and social distancing measures already adopted. These include the closure of educational centres, shops, restaurants, bars and sport venues.

In order to reduce the spread of the virus, the government is also encouraging employers to facilitate remote working, and has issued a new legal framework in order to regulate remote working conditions in the country. The bill – Ley de Trabajo a Distancia y Teletrabajo – was passed by Congress on March 23, 2020, and is the first of its kind in Latin America.

As part of this battery of COVID-19 measures, the Chilean Transport and Telecommunications Ministry (MTT) announced on 27 March the launch of an emergency plan. This is to ensure that all Chileans remain connected during the coronavirus crisis. The plan, dubbed “Solidarity Connectivity Plan” – Plan Solidario de Conectividad – allows users who cannot afford their telecom service bills to temporarily suspend their regular service charges and activate a free 60-day connectivity bundle to browse the web and access emails. The plan, which will kick in on 1 April, excludes the use of data-intensive applications such as video streaming and online gaming. 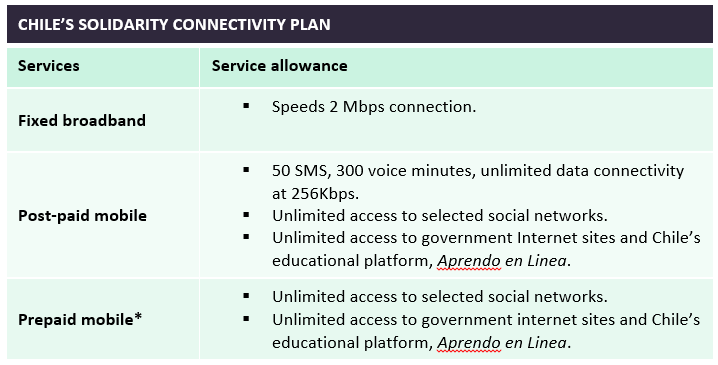 *For clients that have topped up their prepaid SIM cards in the last 30 days.

Telecoms operators Claro, Entel, GTD, Movistar and VTR, which have affiliated to the Solidarity Plan, have announced the launch of additional benefits for their clients. These include increased data allowances for mobile users, bandwidth upgrades for fixed broadband clients, free access to video content platforms, as well as free access to remote working and productivity tools for corporate and business clients.

Despite Chile is one of the countries in Latin America with the highest fixed broadband levels, with a fixed broadband penetration of the population of 19.5% at year-end 2019, the government estimates that around 50% of the households do not have access to fixed Internet services.

According to official sources, the Solidarity Plan is expected to benefit 3 million households in Chile that fall under the low-income category, approximately 40% of the country’s total.