China still leads in AI and blockchain technology with Chinese businesses filing seven times the number of IP patents in AI as closest rival the US in 2017.

Chinese business leads the way in artificial intelligence, filing 473 patents from a total of 649 with the World Intellectual Property Organisation (WIPO), according to accounting and consultancy network UHY.

And in blockchain technology, one-third of all global patents were filed by Chinese businesses.

China’s closest competitor in the race to build portfolios of intellectual property is the United States, which filed 10% of the AI total and 29% in blockchain. 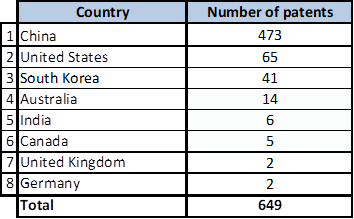 Global ranking in blockchain IP in 2017 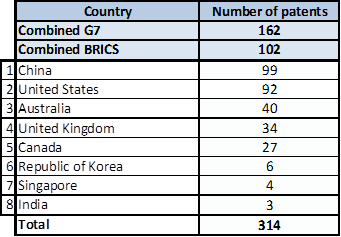 How do global businesses compare?

Baidu, known as the ‘Google of China’, filed 183 patents in AI, the most patents of any AI company, while Berkeley-based startup Bonsai AI was the US’s biggest contributor with only seven.

The Chinese search engine launched an AI translation tool in October 2018 that translates spoken English into Chinese or German almost instantly, and meanwhile Bonsai AI has been acquired by Microsoft announced in June 2018.

In spite of China’s lead in blockchain as well as AI, the biggest filer of blockchain patents in 2017 was blockchain-focused research firm nChain, based in London and Vancouver, which filed 48 patents with the WIPO.

In the US, credit card provider Mastercard filed the largest number of global patents in blockchain, including a patent for a system in offline blockchain exchanges.

AI and blockchain development is critical

Rick David, Chairman of UHY, said: “Blockchain and artificial intelligence could unlock significant economic growth over the coming decades, and businesses across the world are investing in making sure they benefit from that.”

“Developing Artificial Intelligence technology is also going to be critical in determining which businesses will emerge as leaders from the next industrial revolution. The businesses that are positioned best in the long term are those that benefit from private enterprise and government both investing to bring Artificial Intelligence technology to mass markets.”

Kurt Lee, partner at UHY member firm ZhongHua Certified Public Accountants LLP in Shanghai, China said: “Development of blockchain and AI technologies are an important part of China’s economic plans for the next two decades, as they could significantly enhance productivity. Both businesses and the government have made substantial investments in laying the groundwork for blockchain to play a central role in financial services in China.”

The UK falls behind

The UK was the only country in the European Union to make it into the top 10 for number of patents related to blockchain, but matched Germany in the number of AI patents.

This is in spite of businesses like Deepmind, an AI company now owned by Google’s Alphabet, being based in London – Deepmind developed the AI computer programme AlphaGo, which beat GO world champion Lee Sedol.

In April 2018, the UK Government launched its Artificial Intelligence Sector Deal worth £1bn, of which £300m was private sector investment, to bring the UK higher up the ladder in the AI industry.

China and US rivalry in AI

Thought leader Professor Steven van Belleghem commented on the AI battle between the US and China: “Back in 2016, Google’s Deepmind stunned the world when it defeated the reigning human champion in Go, which is widely considered the most complex game for a computer to win. This win was noticed especially acutely in China, where the game originated. It was seen as a kind of national disgrace that a foreign technology had managed to win over one of China’s most treasured cultural achievements – a bit like if a Chinese team suddenly won the Superbowl in the US. This was a huge wake-up call, and the Chinese investment in AI subsequently boosted like crazy.

“The next few years will see a battle between the US and China to define who will become the leading country in the world of AI. It’s going to be an interesting race, as the US certainly isn’t backing down.

“In mid-October, MIT and the famous financier, Stephen Schwartzmann, announced the launch of a new MIT campus focussing on educating AI talent. This new campus is backed by $1bn in donations. The developments in AI will be seen in the field of image recognition, image creation, language understanding. All of these evolutions will lead to better understanding of customer data, it will lead to more convenient interfaces and will have a huge impact on how customer experience develops in the next decade.”