There are few festivals in the world quite as well-loved as Coache’. Tickets to the Coachella Valley Music and Arts Festival are some of the most sought-after in the world.

To be fair, the festival is popular for a reason. Performers such as Lady Gaga, Jay-Z, Muse, Radiohead, and the Red Hot Chilli Peppers have all headlined the Californian festival in recent years. For music lovers, it really is heaven. The fact that it all takes place under the Californian sun is just a bonus.

The festival has grown so popular that in recent years it has expanded to cover two weekends.

Here’s everything you need to know about going to Coachella 2018 and the reason why you needn’t miss out if you can’t get tickets.

The music festival will be held on both 13-15th April and also 20th-22nd April weekends. The line-up is exactly the same whichever weekend you attend on, so it really doesn’t matter. However, occasionally surprise guest performers show up to do one-off shows. For example, Madonna showed up on the latter weekend in 2015 to perform with Drake. Unfortunately, being that these guest performers are, by nature, a ‘surprise’ there’s no real way of knowing who might show up or when. With that in mind, it’s probably best not to worry about them.

The festival takes place at the Empire Polo Club in Indio, California, located in the Inland Empire’s Coachella Valley, in the Colorado Desert.

Who is performing at Coachella 2018?

The festival will be headlined by The Weeknd, Eminem, and Beyoncé. The latter of that trio was due to headline the festival last year but was forced to drop out after becoming pregnant with her new twin babies, Sir and Rumi. However, she’s back up on her feet now and ready to party.

Other musicians performing at the festival include Haim, Tyler the Creator, Alt-J, Cardi B, and Miguel.

You can check out the full line-up in the infographic below: 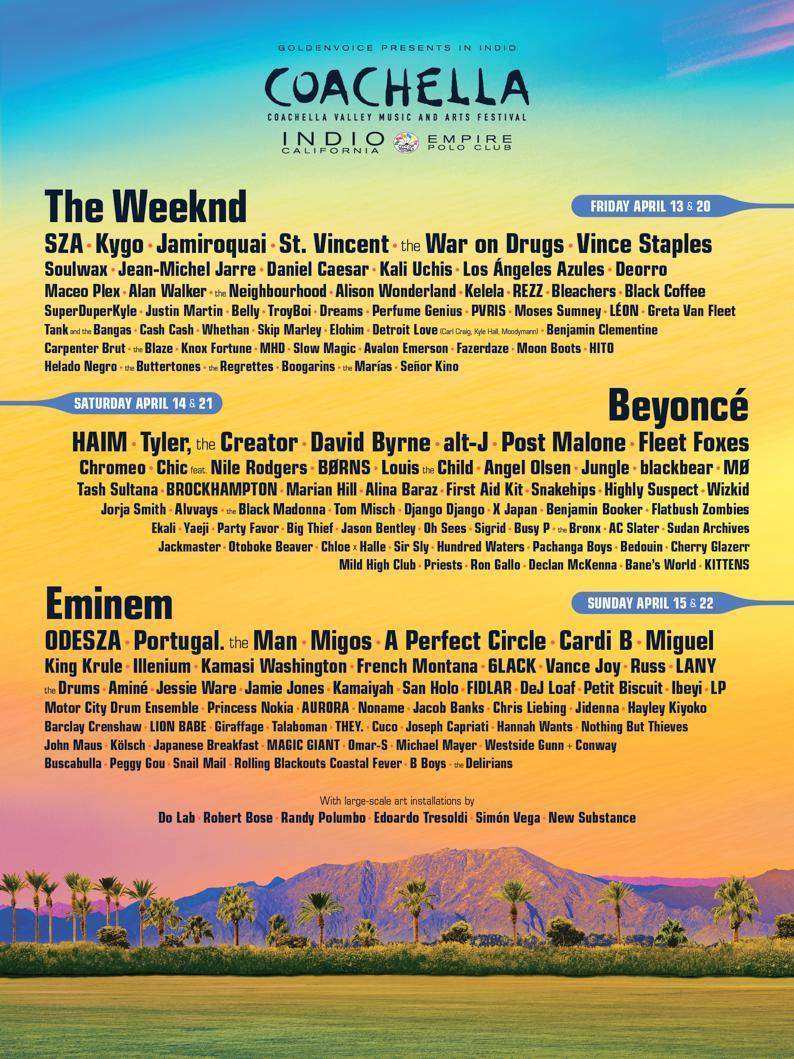 How do you buy tickets to Coachella 2018?

For those intrigued by the recently revealed line-up, you’ll be pleased to know that tickets are still available.

For visitors traveling from out of town, it costs extra to camp at the festival. Guests can choose to camp with their cars or in a tent. Both camping options cost an additional $113 on top of festival passes.

In addition, there are a selection of pre-made camping options which include festival passes. These also come with tents or tee-pees so guests don’t have to bring their own. Guests can purchase these with both VIP and general admission passes:

Finally, there are safari tents. These are private furnished, air-conditioned tents. One tent plus two VIP passes costs $8,500 and two extra people can be added for $2,000 each.

Can I watch Coachella without a ticket?

There’s no denying that Coachella is a seriously costly festival, and that cost might prove challenging for some music enthusiasts. But for those people, there’s another option.

The organisers of Coachella have set up an official festival livestream. This can be accessed from here. It is available all over the world without the need for a VPN and there are no less than four channels which will stream most of the performances from the festival. Obviously at the moment the live stream only shows music videos from the artists who are performing, but it’ll be an invaluable resource in future for those who didn’t manage to get festival tickets.

Who said exorbitant costs need to get in the way of enjoying some good tunes?

Topics in this article: Entertainment, Save the date