Over the last year, the Americas has been an active marketplace for Cloud Service Providers (CSP) horizontal M&A transactions. In North America’s fragmented markets, with multiple CSP participants, operators maintain consolidation efforts to defend market share through M&A. On the other hand, Latin America region continues displaying high market concentration, with major CSPs in this region engaging in M&A mainly to bolster their position in leading markets.

Regarding CSP Non-Horizontal M&A deals, North America stands out as the main stage. Telcos in this mature market are constantly exploring new value propositions for their customers. High penetration of fixed/mobile broadband and connectivity across this region make providers of IoT and SaaS an attractive target for telcos looking to expand their digital ecosystem. 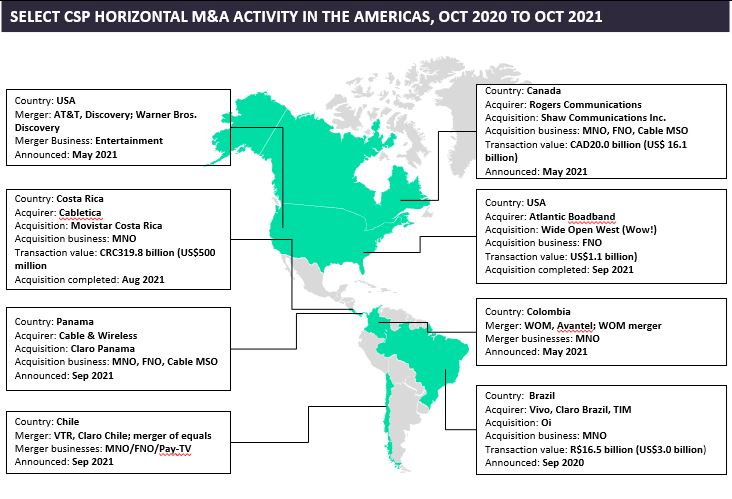 Latin America has recently not seen major activity on Non-Horizontal M&A transactions. This region is mainly focusing in reaching universal 4G coverage. Due to the pandemic, the roll-out of 5G, an essential feature for IoT adoption in industries such as healthcare, construction, and manufacturing, has been delayed across Latin America.

After the pandemic hit, emerging economies in Latin America have fully shifted efforts into keeping their economies afloat. We expect that as of 2023, after 5G’s inception in several Latin American countries, CSP Non-Horizontal deals will take-off.