It has been 30 years since Donald Trump penned an open letter to the American public saying: “America should stop paying to defend countries that can afford to defend themselves”.

Have his ideas changed?

On the 2 September 1987, Donald Trump spent $94,801 of his own money by running full-page adverts in three of the biggest US newspapers. 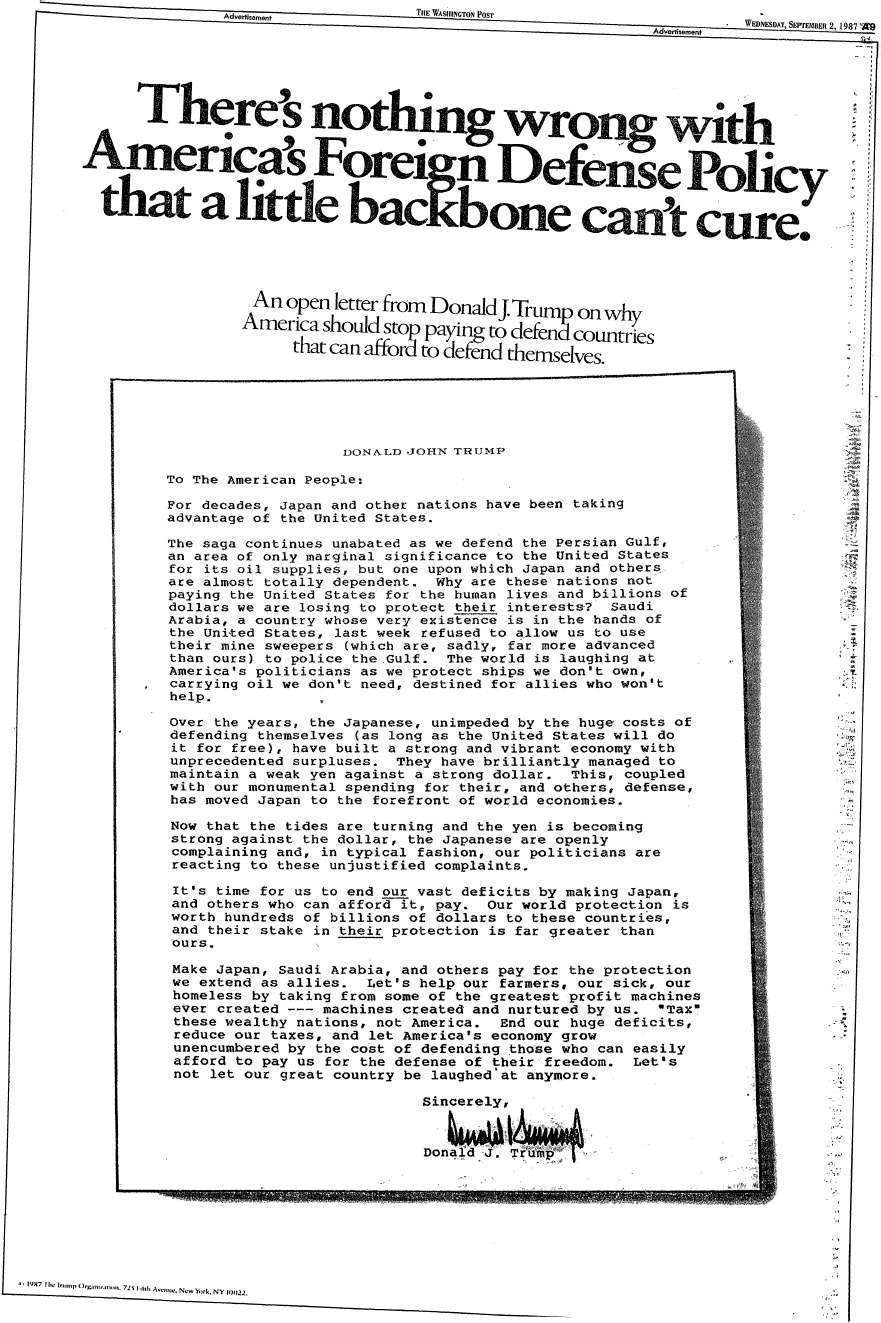 Trump, who at the time was solely a businessman and television celebrity, sparked the intrigue that he may, at some point, head into politics.

The New York Times, Washington Post and Boston Globe all published the letter, in which Trump writes:

Let’s not let our country be laughed at anymore. Tax these wealthy nations, not America.

As a businessman, financial gain is constantly the dangling carrot for Donald Trump. Money talks, so they say – and so does he. A lot.

We all are aware of how much trouble talking gets Trump into, with his almost constant tweeting.

This letter, in reality, is just a very long tweet. He was tweeting before tweeting began and paying almost $100,000 for the privilege. Not forgetting, that in 1987 that was a LOT of money.

The world is laughing at America’s politicians as we protect ships we don’t own, carrying oil we don’t need, destined for allies who won’t help.

The letter sparked huge speculations that this was the first step in a 1988 presidential campaign.

Trump did not run however, and instead George HW Bush marched the Republican Party directly into the White House.

Trump told People magazine that he:

Was hoping that some politician sitting on his ass in Washington would see the ad, read it, and say, ‘That’s a great idea.’

The then president Ronald Reagan and his successors George HW Bush, Bill Clinton, George W Bush and Barack Obama all failed to take his advice.

Seeing as Trump — to follow his own words — is now a politician sitting on his ass in Washington… The question is — will he take his own 30-year-old advice?

President Trump did seem to carry on this thought process throughout his 2016 campaign trail. Trump still claimed that having global alliances is a poor deal for America because allies do not pay enough for America’s security.

End our huge deficits, reduce our taxes, and let America’s economy grow unencumbered by the cost of defending those who can easily afford to pay us for the defence of their freedom.

Richard Bush the director of Centre for Northeast Asian Policy Studies of the Brookings Institution said:

Trump’s approach displays a basic misunderstanding of the alliances’ value for the United States. Why are these nations not paying the United States for the human lives and billions of dollars we are losing to protect their interests?

The idea that the US taxpayer is paying all the expenses for US forces in East Asia has no factual basis. Objective data shows that Korea and Japan each cover around half of the direct costs of the presence of US forces in their countries. To take the forces we currently deploy in Japan and Korea and base them back in the United States probably would not save any money and certainly would make war-fighting harder.

During Trump’s rise to power, his stringent isolationist approach inspired millions of Americans to vote for him. Particularly, with his slogan “Make America Great Again”.

Help our farmers, our sick, our homeless by taking from some of the greatest profit machines ever created – machines created and nurtured by us.

The open letter was a simplistic, naive and relatively idealistic view of how to respond to foreign policies and funding.

Topics in this article: Donald Trump, Politics, US politics, usa