For instance, Vodafone and Orange agreed in April 2019, to grant shared access of their future fibre networks to both operators in Spain.

Furthermore, European telecom regulators and governments are also encouraging and incentivising fibre deployment. For instance, the French regulator, ARCEP, announced a ‘fibre zone’ initiative in December 2018 to stimulate the migration from copper lines to fibre broadband.

Additionally, the Italian government is planning to provide subsidies in a voucher scheme, of up to US$3,423 to small and medium enterprises, and up to US$5,705 to schools, when migrating fixed broadband to the fibre-optic network. Furthermore, the Italian government also incentivises fibre deployment in less profitable areas such as rural areas or areas with a low population density. 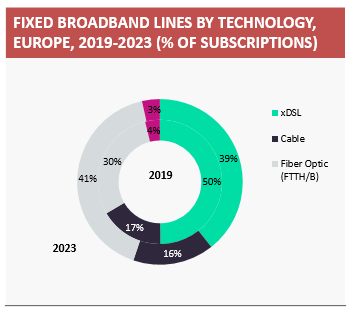