At the age of 14, Fatima Bhutto hid in a wardrobe, clutching her baby brother as shots raged around her family home.

The events of that day are still with Bhutto and 21 years later she is seeking a wider justice — and wants to defend the burqa, often thought of as a symbol of oppression and in the light of the Harvey Weinstein scandal that has engulfed Hollywood, she has a message for western women too.

Murtaza Bhutto was campaigning against the violence and corruption in Pakistan when he was killed and it was his sister’s government who, according to Fatima Bhutto, “presided over his assassination and who cleared it up”.

In 1996 Pakistan there were no court hearings and, as Bhutto discovered, evidence was often destroyed by police. Today little has changed.

I have been on the side of the law where I was shut up. My testimony was not heard and evidence was removed. Yet today in many countries, such as Pakistan and India, the rule still denies justice.

Having worked with prisoners who have been denied trials, and those on death row, Bhutto says she wants to spread the word that justice is a battle worth fighting for.

I have realised from speaking to so many people that injustice hasn’t just crushed me, it crushes everybody. I want to change this.

Is culture or politics to blame for gender inequality?

Bhutto believes that women in India, Pakistan and Bangladesh lag behind in equality not because of culture, but because of politics.

There is a lack of political will to bring women forward — in its place a will to keep women back and quiet.

Bhutto points to developments in women’s rights around the world that suggests the issue is not clear cut.

Women in Switzerland couldn’t vote until 1971 — in Iran women won the right to vote in 1963. In Turkey women have been able to vote since 1930, compared to 1944 in France. Meanwhile, women in Tunisia, Nepal, and Senegal have a higher representation in parliament than in the UK.

There is a perception that in the east women are completely oppressed, but that in the west women are held up as a paragon of inclusion. I don’t think that is the case at all.

The Harvey Weinstein scandal has been a shock to the western world in the way that it has because the west holds itself up as a model on how to treat women. I don’t know a place which is better, but the western world isn’t this ideal.

Has the burqa been misunderstood?

Bhutto is currently working on a documentary for British television about the burqa and how its evolution reflects the changing state of women in Islam.

The burqa conceals all of a woman’s body apart from her eyes. As bans are placed on the garment — in France, Austria, and the Quebec region of Canada — now is poignant time to be working on such a project.

According to Bhutto the burqa is both a freedom of expression and a tool of oppression.

Bhutto herself finds wearing one “restrictive and suffocating” but supports women’s right to choose.

Women don’t wear the burqa because they love not having peripheral vision, or because they want to be oppressed. Everyone connects the burqa to oppression, but this isn’t the full story.

In some places it actually allows women to leave their houses. They can be mobile when they otherwise couldn’t be.

Bhutto sees the ban on burqas adopted by some countries as oppressive as forcing women to wear it — when you force someone into something, you limit their freedom.

In Algeria during French occupation, there was a huge campaign to unveil women. They would put up posters of women in veils with slogans saying ‘you’re veiled, but aren’t you pretty? Take it off’.

There is a lot of misogyny surrounding the narrative of the burqa. Instead of women in Algeria going ‘yes I am pretty’ and taking off their burqas, women felt that part of their resistance to this was to keep it on. 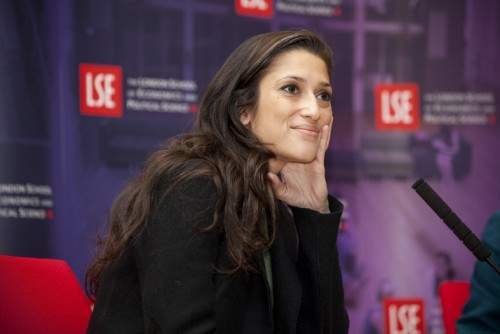 Bhutto speaking at a London School of Economics event

Hollywood has clouded the issue

Lambasting films such as Zero Dark Thirty and American Sniper, Bhutto says they portray countries such as Iraq, Syria, and Lebanon in misleading ways.

There is also no monolithic Islam. With over a billion Muslims around the world, the form the religion takes changes from country to country. Cinema and television are not capturing this at all.

In Homeland, every woman in Beirut is covered up in a really oppressive way. It’s such an offensive portrayal and creates an ‘us and them’.

As a Muslim woman regularly flying from Pakistan to the UK and the US, Bhutto says she has experienced racism firsthand. Passport control is a huge issue for her. She has a Pakistani passport, but was born in Afghanistan and grew up in Syria.

When I travel around I regularly get lots of really racist questions. A common one is ‘you’re a Muslim, how nice that you are allowed to travel’, as if that would stop me.

Bhutto’s documentary will be coming out later this year