In the dying days of October, the boards of Italian and French car giants Fiat Chrysler (FCA) and PSA (Peugeot Citroen) agreed on a merger that would create the world’s fourth-largest carmaker, a proposal that has been largely well-received by the auto industry.

But analysts at GlobalData have poured cold water on this outlook and strongly suspect the deal may go down as one of the worst corporate decisions in the history of the auto industry, perhaps even overshadowing the $35bn 1998 marriage of Daimler-Chrysler, which nine years later was dissolved for a mere $7.4bn.

But why should anyone take heed of the views of tech industry analysts when the auto industry itself is relatively upbeat about the deal?

GlobalData analysts study dominant themes across various sectors based on empirical data. These are the major issues that keep company executives up at night. Some themes — like AI — transcend all industries. Others are more specific. Time and again, companies have demonstrated how a failure to invest in themes can lead to extinction.

In their day, Kodak, Blockbuster and Blackberry were all industry leaders, now reduced to case study fodder for business school lecturers. Each of these companies failed to notice the changing tide of digital photography, streaming on-demand video and the onset of smartphones.

What awaits the auto industry?

So what is so wrong with a merged FCA and PSA? First, let’s think about what is happening in the auto industry: the electrification of transport; increasing automation; and changing trends in vehicle ownership will shake the industry to its core.

A decade ago, few would have predicted the impact a new entrant could make on an industry perceived to be so complex it was immune from rapid disruption. Few would have predicted how quickly public sentiment would turn its back on internal combustion engines (ICE) and diesel in particular. The speed of change has caught the industry by surprise and change, once considered a slim possibility is now inexorable.

How well prepared are the FCA and PSA?

Which brings us to FCA and PSA. These are essentially two industry dinosaurs which we believe could be lumbering toward extinction.

In GlobalData’s thematic scorecard for the automotive sector (below), FCA is ranked 53rd and PSA 54th out of 55 companies. The two companies score worst where it matters most: electrification, autonomous driving and transport-as-a-service.

So think about this. The merger’s primary driver is scale and scale will be achieved by driving cost savings through supply chain integration. The complexity of the supply chains will suck in the companies’ best resources for years to come. But these companies both need to play a costly and time-consuming game of catch up with investments in core technologies for the future transportation system.

And time is a resource neither possesses. The first tranche of diesel bans will come into force in 2025 and will ramp up to the year 2040. That is the current state of play. How many more climate change-related disasters before governments start ramping up legislation to decarbonise transport? Every European flood, Asian typhoon or US hurricane increases the demand for an even faster move towards electrification.

The auto industry seems to be fixated on scale, where biggest is best. In some ways, this may be true. VW is currently in an enviable position and can leverage a worldwide, integrated, multi-marque supply chain. But GlobalData ranks VW higher than most in the electrification and autonomous driving themes. The trouble is, FCA and PSA seem to be implementing yesterday’s strategy to solve tomorrow’s problems. Five minutes spent studying GE’s ill-fated 2014 acquisition of Alstom will provide ample evidence for how badly some mergers can end up. What is FCA and PSA’s most pressing strategic imperative: scale their existing business or create products relevant to 21st-century consumers?

Without sufficient investment into critical themes, they run the risk of creating the largest irrelevance in automaking history, and yet more slide fodder for business school lecturers. 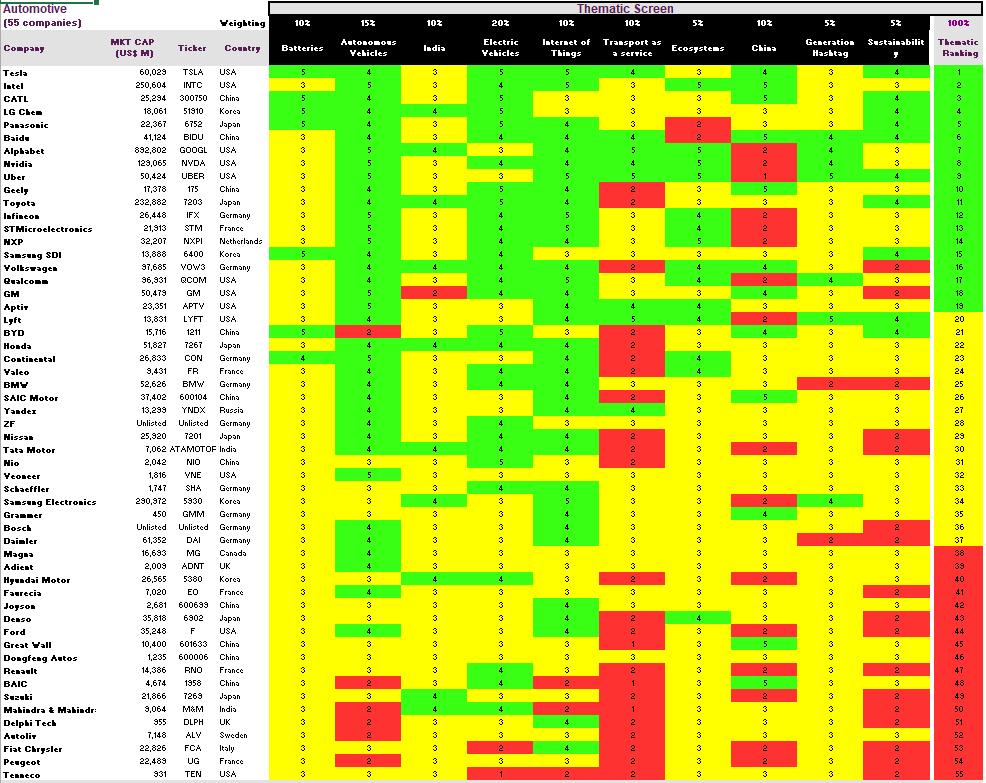 Note: GlobalData’s Thematic Screen ranks companies within a sector on the basis of their competitive position in the ten themes that matter most to their industry, generating a leading indicator of future performance.