GCHQ Director, Jeremy Fleming, said on Friday 23 April that the UK needs to prioritize advances in quantum computing if the country wants to prosper and remain secure.

He’s right. The vast amounts of data protected by RSA encryption is under threat of theft and forgery should quantum computing live up to promise.

While such peril remains years away at least, companies and governments worldwide are getting to grips with quantum computing, as the technology leaves the realm of physics laboratories and into the inboxes of presidents and prime ministers.

The need for speed

Classical computers, such as those in our phones, laptops, and even the world’s most powerful supercomputers, conduct computations with ones and zeros – binary digits, or bits.

If we were to ask a classical, general-purpose computer “which two prime numbers multiply together make this 617-digit number?” it would have to essentially guess at each possible combination. Using this method, most estimates suggest it would take around 300 trillion years to crack – much longer than the age of the universe. There are ways to speed this up, but this form of encryption is extremely difficult to crack classically.

This is vital for protecting important data and is the kind of problem that underpins RSA encryption which is used to protect vast amounts of data on the internet.

A quantum computer, on the other hand, could figure out the answer in seconds.

While researchers agree that you would need around a few thousand qubits to conduct such a calculation (we’re only around the 100-qubit mark right now), it is not beyond the realms of possibility for such a feat to be achieved this decade.

With vast use cases, ranging from artificial intelligence (AI) to weather forecasting, quantum computing’s potential encryption-cracking capabilities should put the technology firmly on the priority list for world leaders and security chiefs.

In the Vincent Briscoe Lecture, Fleming made frequent mention of quantum computing.

Fleming will undoubtably be aware of China’s quantum supremacy announcement in December 2020, in which a team at the University of Science and Technology of China performed a calculation with a photonic quantum computer 100 trillion times the speed of classical supercomputers.

While photonic devices are so far unprogrammable, in that each can only perform one specific calculation, the progress in China is a wake-up call for Western powers to get to grips with the technology.

The UK is among the leaders in the West, in both spending and academic prowess, but China’s $15bn of investments into quantum technologies dwarfs the rest of the pack President Biden will no doubt be keeping a close eye on developments in this nascent industry. 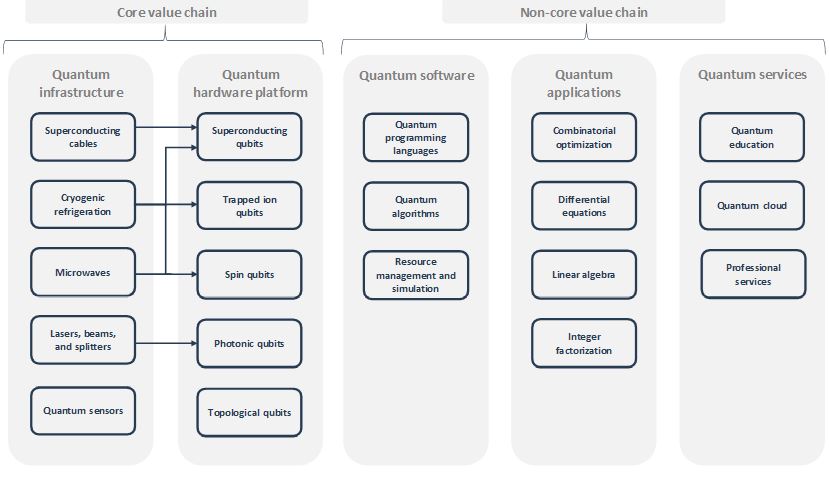 Quantum computing is no doubt going to develop significantly as a theme over the coming years, as recent developments indicate. Governments and corporations alike must now take steps to engage, or risk falling behind.

Integer factorization is just one of the applications of quantum computing, in what is becoming a rich ecosystem of research and development. GlobalData’s quantum computing value chain sets out the segments of this growing industry.