Today, 9 August, is seen as the 10-year anniversary of the global financial crisis.

This was the date that French bank BNP Paribas began shutting down investment funds because there were problems in the US securities market. This then lead to a cycle of events that would consume the major banks around the world.

The BBC’s business editor, Simon Jack, described this moment as the “first tremor of a full-blown financial earthquake”.

Three charts that show how things have changed since 2007

According to research by consultancy Oliver Wyman, much has changed in the global financial market over the past decade.

1. US banks have grown their market share up 10 percent, from what it was 10 years ago 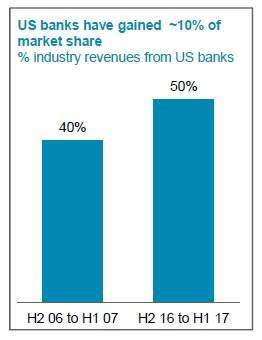 2. However, revenues have fallen 25 percent from pre-crisis levels, from $300bn before the crash to $230bn now 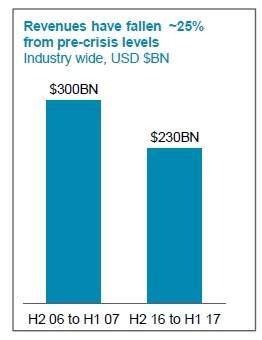 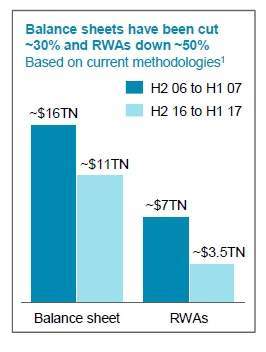 The capital markets industry has radically reshaped itself since the crisis began 10 years ago.  Banks have enhanced their risk management, met new regulatory requirements and cut costs to restore profitability. The next 10 years will see similarly radical changes. The winning banks will be those that embrace technological change and proactively transform their workforce.

How likely is it that another crash will happen?

Though the global economy is in a better position than it was a decade ago, economists are warning that it could easily turn upside down again.

Alastair Darling, the UK’s chancellor in 2007, said that regulators must remain vigilant about the risks to the economy to prevent a crisis happening again.

The lesson from 10 years ago is that something that can start apparently as a small ripple in the water can become mountainous seas very quickly.

As well, he said the rising level of consumer debt in the economy should “raise alarm bells”.

Over in the US, however, there is more confidence in the market. Earlier this year, the Federal Reserve chair Janet Yellen said it was unlikely that there would be another financial crisis in our lifetime.

After carrying out stress tests on the US banks, Yellen said they were very much stronger.

“I think the system is much safer and much sounder. We are doing a lot more to try to look for financial stability risks that may not be immediately apparent but to look in corners of the financial system that are not subject to regulation, outside those areas in order to try to detect threats to financial stability that may be emerging,” she said.