It was always going to be an uphill struggle for Chinese tech giant Huawei’s offshoot Honor to launch its new camera-led Honor 20 phone range, but even high-fidelity 30x zoom couldn’t help the company see the elephant in the room.

At no point in his one-hour keynote introducing the Honor 20 range did Honor president George Zhao mention Google or Android, despite the latest manoeuvre in the US-China trade war in which Google will restrict which of its services Huawei, and by extension Honor, phones can access.

The company had already put press attendees on the back foot by extending an invite to a lunchtime “media reception” at which no food or drink – even water – was forthcoming. We were left to mill around a room with fantasy sets and confused models, presumably for testing the phone’s camera, but the phones themselves were yet to appear.

There was, perhaps wisely under the circumstances, no invitation to share our experience on social media, or a suggested hashtag, as is usually par for the course at these affairs. The slogan of the launch was “capture wonder” but many present just wondered hangrily where the food had got to.

The company further alienated the audience with a video montage that focussed firmly on Gen Z, featuring sulky late teens and early-20-somethings skateboarding in dangerously long skirts or drooping miserably over a sofa. If anyone had taken a shot every time the phrase “young people” was uttered, they’d have been on the floor before it was half-way through.

This could, perhaps, be attributed to cultural differences – according to Zhao the Honor brand attracts a veritable fan club who gather on an online platform known as the Global Youth Community Club. This has a real-world equivalent in Honor Life, a youth club in China where fans can meet over basketball or a coffee. What might score more of a goal with British Gen Zers was the news that Spurs midfield star Dele Alli has joined Honor as UK brand ambassador.

Tottenham footballer Dele Alli has been made a UK brand ambassador for the Honor 20, as part of a focus on Gen Z.

When the phones – Honor 20, Honor 20 Pro and Honor 20 Lite – eventually took centre stage, it was the quad camera that stole the show. The Sony IMX586 48MP main camera could even encourage camera enthusiasts to leave the DSLR at home.

It features an AI Ultra Clarity mode, which effectively takes several 48MP photos and stitches them together into a single ultra-sharp image, and AIS Super Night mode, which does the same with low-light images. It can even capture details of the moon, which has proven elusive for many phone camera users. For close-ups, it offers 3x lossless optical zoom and 30x digital zoom, with software tweaks to sharpen the details.

The quad camera also includes 16MP super wide angle camera, 8MP telephoto camera, and a 2MP macro camera, which lets users capture wider and closer photos with optical image stabilisation (OIS). Its front-facing selfie camera packs a massive 32MP, which Honor claims is the highest resolution on the market, and has a punch-hole configuration so as not to take up space on the 6.26” All View display. The fingerprint security is located on the power button, so users can unlock the phone just by picking it up. 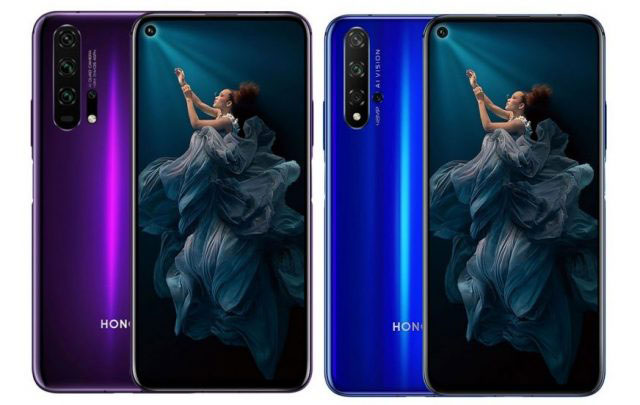 The Honor 20’s camera leads the way when it comes to impressive specs.

Completing the multi-media support you’d expect of a games-led offering, the Honor 20 Series is equipped with GPU Turbo 3.0 software which improves frame rate for the top 25 games. This is topped off with the Virtual 9.1 Surround Sound feature powered by Histen 6.0 audio technology, which Honor says is a first for mobiles. And owners can even access Honor exclusive Fortnite outfits.

All of this comes very attractively packaged in a casing that uses three layers to create what Honor dubs Dynamic Holographic Glassback – basically, it looks one colour but shimmers another in different lighting.

The price Honor has set for all this tech in Europe is a very competitive €599 for the top-of-the-range Honor 20 Pro, €499 for the Honor 20, and just €299 for the Honor Lite, aimed at the much-hyped youth market.

With that, the keynote was over and the audience filed back out into the reception room where those with the sharpest elbows could finally get their hands on the phones which, to a person, they photographed being held in one hand using their existing, and almost certainly inferior, phone cameras.

At any other time and from any other company, many pundits would back the Honor 20 range as a veritable flagship killer. But unless the executive team addresses the trade war constraints head-on – and lays on some canapés – Honor 20 phones may be doomed to make barely a dent in Western markets.