Half of all millionaire CEOs are self-made according to a study of those that hold the ‘chief executive’ job title.

This is according to the wealth consultancy, WealthInsight, which analysed the source of wealth of thousands of CEOs around the world.

According to the study, self-made CEOs are normally chief executive of a company they set up. In a minority of cases they might have founded one company and gone on to head up another.

High profile founder-CEOs include Jeff Bezos of Amazon, Elon Musk of Tesla and, in the UK, Jim Ratcliffe.

Less high profile owner-CEOs often sit at the top of their family investment vehicle, or family office. A report on Tuesday found that these CEOs earn an average yearly salary of $333,000 and that’s before a 29% proportionate bonus.

In compiling the figures, WealthInsight looked at the job titles of over 200,000 millionaires – or high net worth individuals (HNWIs) who hold a net worth in excess of $1m excluding primary residence.

The study also found that most millionaire CEOs work in the financial services industry. Construction and engineering have the fewest (see table).

The wealthiest CEOs are leaders of companies that can be classed as ‘diversified’. These are companies that are active in multiple sectors such as Koch Industries, run the billionaire CEO Charles Koch, or Virgin whose former CEO Richard Branson is worth an estimated $5.5 billion.

Surprisingly tech and telecoms is the worst industry for their wealth. CEOs working in tech and telecoms have an average wealth between $1m and $5m, despite such high profile examples as Mark Zuckerberg and Bill Gates.

The study also found the average millionaire CEO is a 58 year old male with a wealth ranging between $5m and $30m. 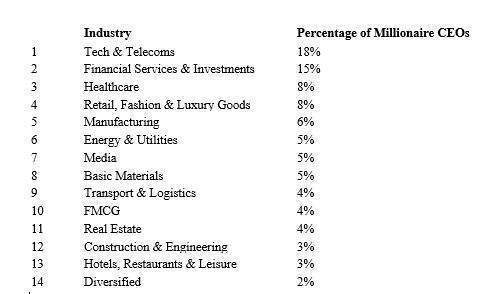